You know who likes triangles?

Pirates and ninjas.
Just saying.
However, since no one here (to the best of my knowledge) is either a pirate or a ninja, I should probably just talk about how writers deal with triangles.
Triangles are a form of conflict we’ve all come across.  Probably one of the easiest a writer can create.  It’s when a character (A) has to choose between two options (B and C).  A is pursuing B, but it’s clear C should be the priority.  Making the decision between B and C provides the conflict, the drama, and maybe even some comedy depending on how it’s done.
We’ve all heard of romantic triangles.  It’s one of the most common ones out there.  Phoebe is dating Wakko, but then comes to realize her best friend Yakko is her real soulmate.  Bob is engaged to a bridezilla, but can’t help falling for the caterer.  The standard in most romantic triangles is that B is very clearly not the right person for A, while C is so blatantly right it’s almost frustrating.
Another triangle most of us have probably seen is the “work vs. family” one.  Will Doug choose to spend the weekend with his family or working on the Hammond account?  Mary’s training so hard with the team that her relationship with her boyfriend is starting to suffer.  There are a few versions of this.  Sometimes it’s friends instead of family.  It’s usually work on the other leg, but it could be any sort of mild obsession or compulsion.  Am I choosing my best friend or this treasure map?  My pets or my new apartment?
Triangles are great because it’s a very simple plot and framework that we can all immediately relate to and understand.  They make for easy subplots in novels, and for short stories and screenplays they can almost be the entire story.  This is one of the reasons we keep seeing them again and again and again.
However... 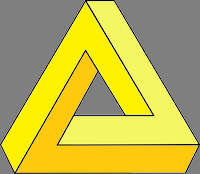 Just because something’s easy and common doesn’t mean it doesn’t get messed up.  I’ve seen a lot of scripts and stories where the writer messed up the triangle.  Heck, I’ve seen a few films that messed it up.  I don’t think it’s a coincidence that none of these films did well at the box office.  Or on Netflix...
How can I mess up a triangle, you ask?
Well, the whole reason we have a triangle is because there’s A, B, and C.  If I eliminate one of these—let’s say B—then all I’ve got left is a straight line between A and C.  This means there’s no choice.  It’s just process of elimination.
Let me give an example...
I saw one film a few years back where a young man decides to travel cross country to lose his virginity with a young woman he met online (she’s his soul mate, after all).  Along for the ride is his longtime best friend, the ugly-pretty girl from next door (played, as usual, by a Victoria’s Secret model wearing slouchy clothes and a pair of glasses), who we all sense is a better match for our hero than this mystery online woman.  In fact, his good friend points out if all this is just about having sex, they could just lose their virginity to each other—at least then it’d be with someone they each care about rather than a stranger.
Our young protagonist is determined, though, and it turns out our mystery woman is an honest-to-god psychopath.  Some third act hijinks take place, our heroes get away, and a few nights later they settle in down on the basement couch to finish up their unfinished business.  The film ends with the happy couple together.
Or how about this one—not a specific story in this case, but we’ve all still seen before...
Phoebe is so obsessed with getting her next promotion that she misses her son’s baseball game, her daughter’s violin recital, and the anniversary party her husband arranged for them.  But she keeps at it because this promotion will put her in a key position for the next promotion, and that’s the one that’s going to put her on top and change their lives.
The stress of all this is too much, though, and Phoebe snaps.  She screws up an account and yells at a client.  When she’s called on it, she even yells at her boss.  The end result is that she’s fired.  But after a week at home with her kids and her husband, she realizes this is where she was supposed to be all along, with her family.  They may not be filthy rich, but the film ends with the happy family together.
Did both of those feel a little hollow to you?  A little lacking?
What happened in both of these examples is that character A never really made a choice.  Once B was eliminated, there wasn’t anything to do except go with C.  Character A didn’t do anything active, they just went with what was left.  Which isn’t terribly satisfying for C, one would think.  Or the readers.
Y’see, Timmy, A has to realize C is the right choice before things go bad with B.  If not, getting C isn’t a triumph.  It’s just a consolation prize.
If my story has a triangle, it has to keep that triangle up until the moment of resolution.  B can still be a poor choice, but A has to actively realize that and then make the choice to go with C instead.  Once that’s happened, I can get B out of the picture, but not until then.
Make sense?
By the way, if anyone’s got any particular topics they’d like me to address or revisit in my weekly prattlings, feel free to toss something in the comments.  In the meantime, I’m going to try to stay one step ahead of the readership here.
Starting next week.
Until then, go write.