As The Tree Said to the Lumberjack...

I had no idea what to rant about this week. None. Blank slate. I’d had an idea in the car a few days ago, but it’d slipped my mind by the time I got home.

You people weren’t much help. I asked for suggestions last week, but apparently none of you have any problems or issues with writing. Must be nice.

So this reminded me of the recurring gag in Throw Momma From The Train. If you haven’t seen it, it’s a movie about a completely blocked novelist (played by Billy Crystal). Said novelist is framed for the murder of his ex-wife (played by Captain Janeway) by a clueless and incompetent student from one of his writing classes (Danny Devito) who thinks Crystal’s tips on writing a murder mystery are an offer to trade actual murders (ala Hitchcock’s Strangers on a Train). Anyway, throughout the film, our hero is constantly lamenting—whining almost—about the fact that he’s been completely blocked and can’t get past the first line of his next book. Was the night hot, or was the night humid? He’s been going back and forth between those two words for months.

And then, while all this was rattling around in my head, someone thanked me over on my Facebook page for helping them get past the mental impasse they’d hit a while back with one of their stories.

All of which is well and good, but doesn’t help me figure out what I’m going to do for this week’s ranty blog.

Now, despite how I started this paragraph, I don’t really believe in writer’s block. I think there can be moments, maybe even minutes, of indecision or problem-solving, but I just can’t believe any halfway decent writer is going to get so completely blocked that they can’t write anything. When presented with the question of hot or humid, most writers will agree it’s very important to have the right one, and they’ll probably come back to it many, many times during their revisions and edits, but I find it hard to believe they’d stop there and do nothing else. Heck, Stephen King was hit by a van and almost killed, but he was still back at the keyboard a few weeks after he left the hospital.

I think when a lot of folks say they’re blocked, what they really are is nervous. They’re sitting down to write and they’re afraid the words getting put down may not be the glittering gems this particular story needs. I mean, one slip up and the whole thing’s over, right? 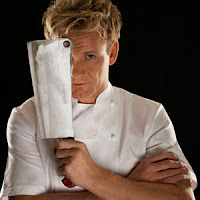 This fear may be normal, but it’s completely unfounded. It’s just this asinine idea of creating ART rather than writing. Do any of you think Lady Gaga never touches a piano except for recording sessions and concerts? Does Michael Phelps stay out of the pool unless he’s at a competition. Does every single thing Gordon Ramsay cooks go out on a restaurant plate?

More to the point, do you think it’s always been that way for these folks? Did Gaga write a few number-one hits the first time she sat down at a piano? Had Phelps ever gone swimming before the Olympics? Do you really think the very first thing Gordon Ramsay ever cooked got him high praise?

But, alas, so many writers think the first words they set down are going to be the ones that get them a Pulitzer. And it makes them freeze up. And so they never write.

Do you remember that old joke about the guy who tells his doctor it hurts whenever I do this? Remember the punchline from the doctor? That’s the big secret for beating writer’s block. If you keep writing, you can’t get stuck.

So, more to the point, here’s a few easy ways to keep writing.

Stop Before The End-- This is what I try to do all the time. It was something I read years ago in a Writer’s Digest sidebar, if memory serves. I leave myself stuff to start with tomorrow. If I feel like I’ve got five or six pages of writing to get out today, I only do four. If I know where the rest of this page is going, I stop after the first paragraph.

What I’m doing is giving myself an easy starting place for tomorrow. There are few things more intimidating than sitting down with no idea where to begin. This way I’ve got that last bit I left to start with, and once the storytelling engine’s up and running it’s a lot easier to keep it going.

Shuffle-- This is another suggestion you’ve probably heard before. I used to do it a lot, but not as much since I’ve cut way back on magazine work. It can help to have more than one project going at a time. If you get stuck on A, you can switch over to B or C. It also helps if these projects are a bit different, in terms of genre, format, and so on. Any bodybuilder will tell you that you can’t just work one muscle group day after day. You get better results when you rotate. When I wrote Ex-Heroes I was constantly switching between that book, screenwriter interviews for the magazine, and the ranty blog here.

Fill er’ up-- Sometimes the reason you’re not moving forward is because you’re out of gas. Despite those silly folks who claim “real writers don’t have time to read,” the simple fact is you need input if you want output. Read a book, watch a movie, or play a videogame. Not one of your favorites that you know by heart, but something new. Get some fresh words and ideas and images into your head. Once they start swirling around in there, you might find that starting point you were looking for—or maybe even an all-new one.

The Batting Cage-- Take the pressure off yourself and just write anything with the knowledge it doesn’t matter. Name and describe all the pets you’ve ever had. Type out a list of your favorite books or your favorite birthday presents. Write up explicit lists of people you’ve slept with or people you wish you’d slept with. It doesn’t matter what you write or what language you use—no one’s ever going to see this. Just get the words flowing. Go with stream of consciousness or random fragments or quotes you’ve been meaning to jot down for other projects.

After fifteen or twenty minutes of this, you’ll probably find you’re writing coherent, consecutive sentences. Even if they don’t have anything to do with your current project—or any of your side projects—they’ve still gotten that part of your brain up and running for the real work of the day. So now you can toss all that and get back to important stuff.

Next week, I feel motivated to talk about character stuff again.