If you don’t get this week’s title, don’t worry. No one does. One of those lost gems of animation.

Try to remember that. It’s going to be important.

I mentioned last week that a story always needs a beginning, a middle, and an end. However, they don't always need to come in that order. Ex-Heroes and the upcoming Ex-Patriots each have almost a dozen major flashbacks to a period before the beginning of each respective novel. 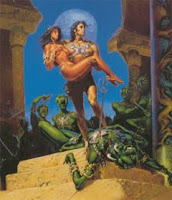 A Princess of Mars begins with the frame story of Edgar Rice Burroughs inheriting a manuscript from his recently-deceased uncle, John Carter, and the film Inception starts with the frame of a battered and ragged Cobb washing up on the shore of an old man’s private island. Clive Barker’s Sacrament dives into an extended flashback that dominates the middle of the book, as does the classic film Casablanca. Everyone remembers Quentin Tarantino’s Pulp Fiction for its wonderful non-linear story and he also loaded the Kill Bill movies with flashbacks. Heck, the film Memento actually runs its story backwards.

Now, there are some important things to remember with narrative structure.

First off, if narrative structure and linear structure aren’t going to match up in a story, there should be a real reason why the story’s being told that way. Is there no way this information could come out except in a flashback? Is there a purpose to cutting back and forth between past, present, and future? Is this structure advancing the story or bogging it down with unnecessary segues?

There was a passable Denzel Washington movie a while back called Fallen. In all fairness, it was a great movie that got dragged down because the lead actor kept doing a Denzel Washington impression through the whole thing. I’m about to spoil the ending, so if you haven’t seen it and have any interest... skip down a paragraph or two.

Fallen begins with Denzel in his death throes. He’s thrashing around in the snow and clawing the air. His voice over tells us (paraphrasing a bit)...

“Lemme tell you about the time I almost died. Actually let me start a little before that...”

At which point the film leaps back in time about a week to Detective Denzel attending the execution of a serial killer. A serial killer who, it turns out, is actually possessed by a demon. And by the end of the film, said demon has possessed Denzel. The frame sets up the audience for a twist-- it hasn’t been the detective narrating, and it wasn’t him dying. It’s the demon, trapped by the detective’s final act. Without the frame, there’s no twist.

In my book, Ex-Heroes, every third or fourth chapter is a flashback. This serves two purposes. One, since it’s already a shift in the narrative, it also let me shift the viewpoint to first person. It also lets me tell another aspect of the story. While the main plot of Ex-Heroes is about living in the aftermath of a zombie apocalypse, it’s also important to know how this all came about. So shifting into the past let me develop a few key characters and it let me see some important events through their eyes.

A bit more on that next week.

Remember that sentence up above I told you to remember? Do you know what it means? Well, it’s not a sentence, it’s just the alphabet out of order. But it kind of looks like a sentence, and I’m willing to bet a few of you spent a moment trying to decode it (is it backwards writing? Serbian? Roman numerals?) without much luck.

Y’see, Timmy, there comes a point when a writer has broken up the narrative with so many flashbacks, recollections, and frames-within-frames that they've just got gibberish. Oh, sure, if you spent twenty minutes or so studying that first example you would've all eventually figured out it was the alphabet. I don't doubt that at all. The same could be said about any number of non-linear books or screenplays. Given enough time, a spreadsheet program, and a bottle of rum, most of us can make sense of just about any story.

But no one wants to read a story like that. I don’t think any of you read this ongoing series of rants with the hope that someday you'll understand what I'm talking about. You read it because you want to understand something now, not for me to show off by giving you an incomprehensible puzzle of verbs and nouns to work out over the next week or so. So while it's okay to mix a story up a bit, at the end of the day your audience has to be able to follow the story. Flashbacks and frames are great, but, like so many things, need to be used responsibly and with moderation.

I got to interview Bruce Joel Rubin, an Academy Award-winning screenwriter, a while back. During our talk, he made the keen observation that stories, especially film stories, are experienced through the gut, not through the mind. The moment your audience has to go into their head to understand a story--you've lost them. It shatters the flow and brings them out of experiencing the story and into, on some level, analyzing it. So the last thing you want is so many non-linear elements that the reader has to stop for each one and figure out how it relates to the last twenty or thirty.

And really, this is what I’m going to talk about next week. Linear and narrative structure need to work together, not fight each other.

So, until then, go write something.