I Was A Very Driven Boy Scout

I’m sorry this is a bit late. I wanted to have it done for Thursday, but then... y’know, then I just couldn’t find a compelling reason to work on it.

I read a book a few weeks ago where the main antagonist is an ex-con. While he was in prison he found a niche market, learned about computers, and set up a nice little business for himself involving convicts still inside. It’s nothing great, but it’s completely legal, ethical, and he’s pulling in close to a grand a week for fifteen or twenty hours of work. He often ponders the fact that if he’d know it was so easy to make money legitimately, he never would’ve ended up in prison.

Which is especially confusing because at the start of the book he’s working as a one-man Brute Squad and committing murder to neaten up “any possible loose ends” for the big man who’s pulling all the strings. Much later in the book (after more brutality and further explanation of how great his niche business is doing) the antagonist finally explains that he feels he owes a debt of honor to this person he’s working for. That man pulled a few strings to help get him out of prison, after all, and he sure as hell doesn’t want to end up back in prison.

Those last italics are mine. They’re not from the ex-con who’s got a completely legitimate business pulling in a grand a week for twenty hours of work and is murdering people on the side. A guy who, it’s also been established, has no real loyalty to anyone but himself. And his business, which he’s thinking he may expand.

Sooooooo... it wasn’t really clear why this guy was doing any of the stuff we saw him doing. In fact, as the book went on his actions became less and less plausible. Especially when he kidnapped a woman so he could blackmail her husband and then suddenly decided to rape her.

Definitely the action of an ex-con determined not to go back to prison.

One of the most common things that makes a character unbelievable is when they have no motivation for their actions. We’ve all seen it. The guy who decides to pick a fight over something petty in the middle of a crisis. The person in charge who continues to ignore someone with key information. The spouse who’s just a jerk. The ninja who attacks for no reason.

Y’see, Timmy, nothing knocks a reader out of a story faster than people just randomly doing stuff. There’s a simple reason for this. In the real world, when people do things for no reason, they’re usually considered to be insane. Not an interesting insane, either, but the “lame motivational excuse” insane. If I run into a burning house to save a baby or a dog, I’m going to be considered a hero whether I make it out or not. If I run into the flaming house just because it’s there, I’m going to be considered an idiot. 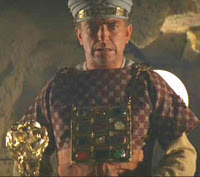 People need a reason to do things. Real reasons. Reasons that jibe with their background and their personality and with basic rules of behavior. That’s why you’ve heard of people motivating horses with a carrot on a stick but not with a t-bone steak on a stick. In Raiders of the Lost Ark, it’s completely understandable that Belloq wants to open the Ark before taking it to Germany, and believable that the Nazi officers would feel uncomfortable about performing a “Jewish ceremony.” This fits with Belloq’s smarmy background and it makes sense—historically, even-- that Colonel Dietrich would be a bit by disturbed by what needs to be done to open the Ark.

So here’s a challenge for you—try to picture that scene reversed. Can you imagine if, at that point in the film, Dietrich is insistent on performing the ceremony and Belloq is saying “no, no, I really think we should just take it to der Fuhrer and let him deal with it”...? It wouldn’t make any sense, would it?

In the book I’m working on right now, a very major motive for many of the characters is curiosity. So is fear. And, after a certain point, survival. I’m not saying that everyone in the book acts rationally, mind you, but their actions fit who they are and what they believe they’re going to accomplish.

Now, sometimes the story needs people to act a certain way. It’s been plotted out and now the characters need to do this so that can happen a bit later. What some writers don’t seem to get is that this doesn’t make a character’s actions more believable or forgivable.

In the example I gave above, the reader’s given two contradictory sets of information about the ex-con. On one hand we’ve got a man determined to stay on the straight and narrow with all the motivation he needs to do it—good character building stuff. However, almost all we see him do in the book is commit acts of murder, kidnapping, blackmail, and even one breaking and entering. All this advances the plot, yes, and at a breakneck pace, but it does this by making the character less and less believable. And that really made him less and less of a threat. To be honest, I realized at one point I was actually picturing him as a cartoon. In my mind, the book had turned into a sort of high-tech thriller version of Who Framed Roger Rabbit because the only way to rationalize this nonsensical character was to turn him into something completely absurd.

Here’s one other good point worth noting. The reader has to be able to relate to the character’s motives. This is especially important for stories set in radically different cultures (Japan, for example, or India under the caste system) or perhaps in entirely fictitious ones (Barsoom, Diagon Alley, or the grim darkness of the future). While the characters might have very true and proper motivations within the context of their tale, those motivations still need to be interpreted by the chosen audience. It’s common to hit this wall in stories where the writer knows their chosen setting too well or maybe had to build their amazing world from the ground up.

People’s motivations tend to be simple. If you’ve ever seen a procedural show, they often talk about the common motives for murder. Love, money, revenge—they’re very basic ideas. The unspoken motive for the cast of these shows is justice, or perhaps closure. In Raiders, Belloq is looking for glory and maybe a bit of power (I think it’s safe to say he was secretly hoping he’d get all the benefits of that “hotline to God”).

Look at the characters in one of your stories. Follow them for a few pages. Can you explain their actions with one or two simple words? Are they words that most people will know? Do these words relate to the character and not your outline?

Then you’ve probably got some very driven characters.

Next week, a few tips from Esmund Harmsworth about mysteries—many of which can be applied to writing as a whole.

For now, hopefully you feel motivated to go write.