I’m not that big on Cyber Monday anymore because it really tends to just direct a lot of traffic toward Amazon. But it’s that time of year where people have too much eggnog and all the skeletons come out of the closet. Uncle Jack hates to admit it, but artists only get to make art because they get paid.  Artists get paid when people buy their art.

So I’m going to ask you to buy some books. And for two or three of them, I may have to direct you to Amazon. For everything else, you should just be going to your local bookstore and asking for a copy. They’re very cool, they could use the business, and this way you’re not one of those conformists sheeple falling for that Cyber Monday capitalist nonsense. You’ll get to brag about that until Valentine’s Day, easy.

So here’s a list of my books and a few short story collections. Please put them on your wish list or get them as gifts for friends and family members.

First up, you could pre-order The Broken Room at your favorite local bookstore, in hardcover or paperback. It comes out in early March, so really this is a gift for yourself. And kind of for me, because those preorders really impress publishers and help out a lot. I think we’re going to be having a cover reveal any day now...

Terminus is part of the Threshold universe of stories. It’s about a bunch of people who end up at a strange, uncharted island in the middle of the . Chase is running away from things, Anne is running towards them, and Murdoch is slowly coming to realize he probably shouldn’t’ve stopped running. They all start to explore said strange island, their paths begin to cross, and the end of the world begins to unfold around them. It’s currently available in ebook and audiobook (read by the always-fantastic Ray Porter). No paper, I’m afraid, but I may have news about this next year...

Dead Moon is about a woman who runs away to the Moon and finds... well, zombies on the Moon. And some other things, too. It’s spooky and fun and I’m quite proud of it. It’s another one that’s in ebook and audio, but no paper (sorry)

Paradox Bound is my New York Times-bestselling story about infatuation, road trips, American history, a pretty cool train and some pretty creepy antagonists. F.Paul Wilson said it was like Doctor Who crossed with National Treasure, and if that doesn’t get you interested I don’t know what will. There’s an audiobook, ebook, paperbacks, and you might even find a hardcover here or there if you’re lucky. Call your local bookstore and ask if they’ve got one.

Somebody once described The Fold as a horror-suspense novel disguised as a sci-fi-mystery, and I’ve always liked that. It’s available in pretty much every format you can imagine, and it’s also part of the unconnected "series” of Threshold books.

Several of you found your way here because of my odd little sci-fi-urban-horror-mystery novel--14. Alas, the paperback has lone since gone out of print, but there’s still an ebook and a phenomenal audiobook narrated by Ray Porter (the first project we did together). And there might be more versions in the year to come, but we’ll talk about those when we can...

Another big bunch of you are here because of the Ex-Heroes series. Superheroes fighting zombies in post-apocalyptic (and a few other places).  Ex-Heroes, Ex-Patriots, Ex-Communication, Ex-Purgatory, and Ex-Isle. All of these are available in a number of formats and a number of languages.

My mashup novel, The Eerie Adventures of the Lycanthrope Robinson Crusoe, is finally available as an audiobook. Bad news... it also only has audio and ebook versions at the moment. Sorry. Hoping to fix that soon, but I really think the audiobook might be a better format for this one. 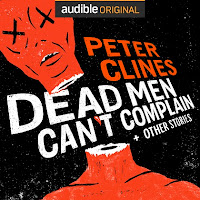 I also have a short story collection called Dead Men Can’t Complain.  It’s got a bunch of stories I’ve had published over the years in various anthologies and journals, plus a few original ones.  It’s an Audible exclusive, and it’s read by Ray Porter and Ralph Lister.

You can pick up The Junkie Quatrain as either an ebook or an audiobook (still no paper, sorry). It’s my attempt at a “fast zombies” tale, a short series of interconnected stories I’ve described as Rashomon meets 28 Days Later. It also features a recurring character of mine, Quilt, who keeps showing up in different stories in one way or another...

Thus ends my shameless Cyber Monday appeal to you.  Again, so very sorry we had to do this, but it really does make the marketing folks happy and they’ve always been really good to me. Also, please check out this year's list of some of the great books I’ve read by other, much better authors.

And please don’t forget my Black Friday offer if you happen to be one of the folks who may need it.

We now resume your regular internet shopping. Browse responsibly. Clear your history on a regular basis. Especially you, Doug. No, sweet jebus, don’t click on that—that’s not really from PayPal.

And we’ll be back to regular writing stuff on Thursday.