I know I said I was going to talk about creepy clowns this week, but I couldn’t get the idea to gel quite right in my head. Plus then I got the social media question and had to deal with some other stuff. Anyway, I figured I’d backburner the clowns for now and talk about something more exciting for a minute.

Sorry, not prologues. Everyone knows prologues are awful and you should never, ever use them. Except, y’know, when they work. What I meant to say was Bond. 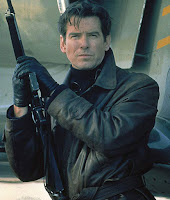 If you think about it, prologues are kind of baked into the Bond film formula, especially the classic films. We’d always begin with James off on some little side mission, or maybe just finishing up a larger one, and then the opening credits would roll and we’d begin the actual movie. You know what I’m talking about, yes? It was the standard structure for decades, and even the new films kind of hold to it (although not quite as rigidly).

So why were these prologues so amazing that they were used through over twenty movies?

First, it’s starting with action. By dropping us into the story right as a mission’s being brought to a close, it’s a perfect time for face-punching, explosions, gunfire, and bigger explosions. So not only are we starting with action, it’s action that has a clear purpose, a reason for its existence.

Second, the prologues always directly involve Bond. We don’t get long prologues about what other agents are doing, it’s about what our hero is doing. Right now. He’s part of the action, and usually the driving force behind it.

Third, and maybe most importantly, the Bond prologues always end up tying back to the main plot. Often directly to it. We get far enough in and learn that guy’s not dead after all, she was related to that other guy, or that other person got away with the goober that’ll let them do the thing in act three. So the prologues also serve as a bit of worldbuilding for the overall story and maybe some character introductions, too.

And it’s not just Bond. This structure became so popular dozens of other action movies followed it. Hell, they’re still following it. Look at Thor: Ragnarok. Drops us right into the action with Thor winding up a mission to get Surtur’s crown, which ultimately ties back and becomes a key part of resolving the movie’s main plot.

So don’t be scared of doing prologues. Just make sure they follow Bond’s three simple rules. And if they don’t, well...

I was going to make some sort of “licensed to kill” joke here but everything I came up with was pathetic. Just pretend I said something fantastic. And accept there’s a good chance I’ll need to get rid of a prologue that doesn’t follow these guidelines.

Next time... I may double-post again next week. So there could be multiple topics.