It's Not Christmas Without...

And here we are, at that wonderful time of year when a young man’s thoughts turn toward... .

I wanted to do a holiday-ish post, and then (while watching a favorite seasonal movie) it hit me I could address a fierce debate that’s surged up over the past few years. And maybe I could even make it semi-educational. From a writing point of view.

Is Die Hard a Christmas movie?

Now, let’s be honest. If you’ve got strong opinions about this, I’m not going to change your mind. But if you're somebody who cares a lot about stories (and if you’re reading this, I’d guess there’s a semi-decent chance you are) maybe this week’s little ramble will make you look at Mr. McLane’s late December adventure a little differently. And maybe some other stories, too.

With that disclaimer out of the way... let’s start by talking a bit about the difference between an element and a genre. I’ve mentioned this before, so I won’t go into it too much. Simply put, there are a lot of labels we can slap on both story elements and genres, but the presence of one doesn’t automatically create another. For example, there’s a strong romance element in Bloodshot, the Vin Diesel movie that came out earlier this year. It’s also got a few funny moments. But I don’t think any of you would be surprised to learn Bloodshot isn’t considered a romantic-comedy. Romance, comedy, suspense, mystery, horror, sci-fi... all of these things can be in a story that’s not in that same-named genre.

So let’s talk about Christmas as an element and as a genre.

As an element, Christmas can be a couple things. Easiest is the setting—it’s a specific timeframe that pretty much everyone on Earth knows and can understand to some extent, even if they don’t celebrate the holiday themselves. Also worth noting that Christmas is one of those (if you think about it) rare holidays that has a very fixed date, unlike lots of other that slide around the calendar a bit each year.

Christmas is also in the details and descriptions. Christmas trees, wreaths, presents, garland, lights, a Santa on every corner and a snowman in every yard. These are things I can mention in my story (or show in my movie) and they create an immediate association for people.

It’s also a mood, and a lot of traditions. If I’ve got a story set at Christmas, it’ll probably show up in dialogue. Let’s face it, people interact and talk a little differently in December, no matter which way they feel about any particular holiday. Scrooge is a little nastier. That super-peppy woman at the coffeeshop is almost scarily happy and peppy.

I think there’s a lot of movies and stories out there that get marketed as Christmas tales, but really just have a few random elements tossed in. We could move said movie to Memorial Day weekend or a random bank holiday and nothing notable would change. The romance would have the same meet cute, the comedy would have the same awkward moment at the dinner table, the zombie movie would have the same stupid montage of our protagonist fighting the horde witha baseball bat.

And this would bring us to Christmas the genre. There’s a lot of thoughts on defining genre (I’ve shared some too) but I think one notable thing is how abundant those elements are. Eventually the romance or the comedy becomes a dominant aspect and we think of this story as a romance, a comedy, or maybe a romantic comedy if it’s got both. The horror or sci-fi elements are so intrinsic to the plot my novel would crumble without them.

What marks something as part of the Christmas genre? The setting, absolutely. Sometimes the characters. It’s really hard to do a movie where Santa or Rudolph’s a main character and not have it be a Christmas story. And we see a lot of common themes in the Christmas genre. Joy. Peace. Happiness. Love. Togetherness.

There’s another aspect to this, and it’s something I hinted at up above and once talked about with (shameless name drop in three... two...) Shane Black. Christmas, maybe more than any other Western holiday, is an amplifier. Everything hits a little harder at this time of year. Romance is great, but Christmas romance is even better. Friendship is wonderful, but being with your friends at Christmas is fantastic. Family squabbles can be funny, but during the holidays they’re even funnier. And, yeah, puppies are great, but have you ever seen CHRISTMAS PUPPIES?!?

(seriously, you just grinned at the thought of Christmas puppies, didn’t you? See?)

And, yeah, this goes the other way. If something’s tense, it’s three times as tense at Christmas (scientifically measured). When something horrible happens, it’s even more horrible because it happened at Christmas. And to touch on a serious issue, depression’s never great, but depression during the holidays is just awful.

So I think it’s fair to say there are stories that may lean heavily toward non-Christmas elements, but the Christmas setting amplifies these stories. It inherently makes them more than they would be without it. Not a coincidence how many Christmas stories involve finding true love or reuniting with your family. And there’s a serious glut of Christmas horror movies. No, seriously. They’ve been a thing for decades.

Now... keeping all that in mind... let’s talk about Die Hard. 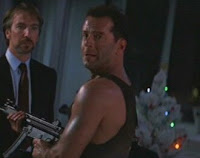 Die Hard is loaded with Christmas elements. I mean, 90% of it is set at a Christmas party gone very bad. And it’s a high-end party so decorations are everywhere. Really, look at a lot of these scenes and check out how often there’s a wreath, a garland, a Christmas tree, something. I’d bet half the scenes in this movie have a direct, visual tie to Christmas. And the music! It’s all Christmas music. All of it.

Plus, this setting is a big driver for the plot. John’s out in LA to see his kids and maybe patch things up with his wife. The Christmas party is why there are so many people conveniently in the building after hours to be taken as hostages. The watch she got as a Christmas gift from her boss is a point of contention (and a great Chekhov’s gun). When the FBI wants to shut down power to the building, the main reason there’s a fight is because it would mean shutting off the electricity to ten blocks of LA on Christmas Eve. Hell, John’s last minute surprise for Hans Gruber and his Huey Lewis look-alike pal? Remember how he pulls that off...?

Finally... the amplification factor. Realizing your relationship is collapsing is always bad, but on Christmas Eve? Sweet jebus, that’s a gut punch. Getting taken hostage absolutely sucks, but when it happens at the company Christmas party? And issuing ominous threats to the bad guys is badass, but when you get to tag on Ho-Ho-Ho...? Seriously, it’s one of the most memorable moments in a movie filled with great moments.
And so many of those moments get cranked up five or ten percent higher ‘cause we’re constantly reminded... it’s Christmas.
So... is Die Hard a Christmas movie? I mean, I think it is. And if you want to argue it isn’t then I think there’s a lot of other movies (many of them with Christmas in the title) that we’d have to toss out as well. ‘Cause if we’re saying hitting all these benchmarks doesn’t matter... well...
Look, nobody likes a grinch, okay?
With that, speaking of grinches, I give you one last shameless capitalist reminder that you can give people ebooks as last-minute gifts, and I happen to have a ton of them out there.
I hope this long weekend is wonderful and peaceful for you, no matter who you are, whatever you believe, and whatever you celebrate this season.
And maybe we’ll squeeze in one more chat before 2021.