Yeah, that’s right. Extra post on top of all the Tom Gauld cartoons I’ve been putting up. Because I’m having trouble focusing on my book, but I’ve been helping other people with theirs.

Hey, speaking of which, a friend of mine was having a point of view problem. Her novel’s in third person limited, but every now and then it would kind of drift out of her lead character’s point of view and settle with somebody else. Only to leap back to the protagonist a few paragraphs later. She knew it was there, but she just couldn’t get it right in her mind.

And as we were shooting emails back in forth, I had a sudden random thought on how to explain it. Which I shared with her. And will now share with you.

Third person POV is like one of your characters having a parrot on their shoulder.

No, stick with me, this is brilliant... 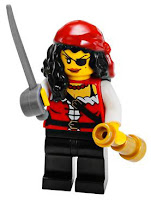 Let's say our main character is a pirate captain we’ll call Bonnie. Bonnie has a parrot who rides around on her shoulder. That parrot is her story’s point of view. Really, he’s our point of view into the story.

The parrot’s close enough to her eye level that it sees what she sees and hears what she hears as she moves through the plot. It’s even close enough to Bonnie’s head that it can hear her thoughts. Yes, some parrots are telepathic at close range. Really. But only at close range, so it can't hear anyone else's thoughts, because it's on Bonnie’s shoulder.

If people walk away from Bonnie, the parrot naturally has trouble hearing them. I mean, its hearing isn’t any better than her’s. It might even have trouble seeing them. Heck, they might walk out of the room or building or whatever and they’re just gone as far as the parrot’s concerned. And the same’s true if Bonnie walks or rides or sails her ship away from them. The parrot's on her shoulder, so it loses sight of them.

Now, this isn’t to say the parrot can’t jump to someone else’s shoulder. It's not chained to Bonnie or anything. But if it does leap over to someone else... well, it’ll be really clear it happened. There’s going to be flapping wings and flashes of color and maybe a squawk or two. Everybody is going to know if that parrot switches shoulders. We'll have no question it happened, and we’re all going to know where it is now. And once it’s over there it’s going to be seeing and hearing the same things as them. And maybe their thoughts, too, because seriously... they can do that. 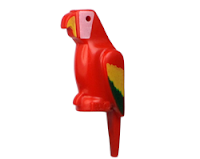 But also keep in mind... the parrot’s not going to switch shoulders for no reason. It’s gotten comfortable on Bonnie’s shoulder. It’s content. It’d need a really good reason to jump over to somebody else. And to jump back. We definitely don't want it jumping here and there and back and forth 'cause—again—we’re all going to know if the parrot jumps to another shoulder. And I don't want people focused on all that movement instead of what’s actually going on.

My point is, at any point in my narrative, I should be able to say “where’s the parrot” and know the answer. If the parrot is suddenly somewhere else, and I don’t know how it got there, I have a problem. Because we know it’s a big deal when it jumps to someone else’s shoulder. If we missed that movement... something went wrong.

Does all that make sense?

My third person POV should stick with my character, and we should know—without a shadow of a doubt—if it shifts to be with another character. Because I don’t want my readers to suddenly be lost, trying to figure out how and when the point of view—when we, the readers—jumped from Wakko over to Dot. That’s the kind of thing that breaks the flow. And breaking the flow is always bad.