Look at the Size of That Thing...

Two author-acquaintances of mine (author friends? I guess we’re author-friends) recently mentioned they’re working on big books right now. Which struck me as mildly amusing because the book I’m working on right now is looking to be a bit larger-than-usual for me. And, oddly enough, I’ve seen a few other folks bring up their very big books lately.

So it might be a bit awkward, but, well... let’s talk about size for a few minutes. 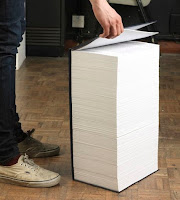 One question that comes up a lot in writing discussions is “how long should my book be?” Depending on where it’s getting asked, this can get a few different responses, and these may get very different reactions. Thing is, this is really two questions, and they each have a correct answer. And they’re not always the same answer.

If I’m asking from the writing-as-an-art side of it, then the answer’s simple. Stories can be any length. Any length at all. I can make my book whatever it needs to be to tell the story it needs to tell. Seventy pages long to seven hundred pages long.

If we’re talking about publishing though—writing as a business--the harsh truth is there are a lot of limits on how long a story can be. I’m sure some folks read that and automatically get defensive. They start thinking about the needs of the story and gatekeepers and getting ready to point out two or three exceptions that will prove how wrong I am.

I was once like you. I’d done my research, seen the supposed size limits on first novels and different genres and I laughed. I pitied those people. Because I knew what I was working on was going to blow past ALL those artificial limits.

Then, one day, somebody sat me down (well a few people over a course of time) and started explaining why these limits exist. That they aren’t just some arbitrary decision thrown down by an inherently evil publisher. And then it was much easier for me to understand why I really needed to cut another 20,000 words from the brilliant masterpiece that was my first completed novel.

As we’ve mentioned before, publishing is a business and their job is to make money. Paper costs money. So printing a longer book costs more money (because it uses more paper). This means the book's cover price is going to be higher. And the more expensive the book is, the less likely someone’s going to be able/inclined to pick it up. And they’re definitely less likely to pick up that more expensive book if they’ve never heard of the author 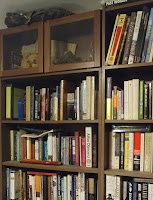 It also means less of other books on the shelves. That price is getting passed on to bookstores, and they don’t have unlimited resources. Buying four or five copies of my big book means a few less copies of other things. Plus, the actual shelf space is a limited resource, so if my book of incredible girth takes up the space of three books... that’s two other books they aren’t going to be able to shelve for every copy of mine they get. So there’s some more math here about how much that book sells and earns versus how much those three books would made and earn. And believe me—the bookstores and the publishers are both running that math.

And some of this gets influenced by the specific audience the book’s trying to reach. For example... romance and mystery novels? The folks who buy these tend to buy a lot of them, often collecting whole ongoing runs. So both of these genres lean toward the smaller side. They’re shorter, less expensive books so people can afford to buy more of them. And it’s been that way for so long that the smaller size (and structure and pacing)  of these genres have come to reflect it, and the audience has come to expect it. It’s like how we all expect movies to fall into a 90 minute-two hour range. Doesn’t mean movies can’t be significantly longer or shorter, but it just instinctively feels a little wrong to us when they are.

What this all means is most publishers don’t want to see a three-inch-wide paperback unless they know they’re going to sell a lot of copies of it. I’m a New York Times bestseller and this is my twelfth full novel I'm working on right now. I’m a known quantity to my publishers with a good-sized fanbase. And I’m still a little nervous about the fact that I’m going to be showing them a book over 150K words.

Well, yes and no. Hopefully my book had some kind of narrative and dramatic structure to it, and just breaking it up means I’ve shattered those structures. I mean, if at the end of my book the tension’s ramped up to four I’m probably not going to get a lot of folks interested in book two. So splitting things up means I need to restructure everything. That’s going to be a major rewrite or three. Possibly just redoing everything from the ground up.

Well, says InternetDude69, purveyor of wisdom, I’ll just publish it myself. That way those freakin’ gatekeepers can’t turn it down for financial reasons.

True, but most of the POD services are still working off page length to calculate costs, and they’ve got much more hard limits. Just a few pages this way or that can mean a difference of three or four dollars per copy. And somebody’s got to eat that cost, one way or another. This is why I had to cut about 30,000 words out of my book 14—it was with a small publisher who used POD and they couldn’t afford to have it stretch into the next page-range. It was the difference between a $14.99 paperback and a $19.99 one.

Okay, fine, says RealWriter7927. Print’s a dying medium anyway. I’ll just put it out as an ebook. More money for me that way.

This is also an option, sure but... look at the numbers. Shorter books do better as ebooks, especially from self-publishers. The vast number of folks who’ve had any degree of success with ebooks are doing it with books under 100,000 words. I think a lot of them are under 80,000. The “why” of this is a whole different discussion, but for now we just need the simple numbers. Ebooks tend to do better as shorter books.

Now look—if my book’s 250K words long and it absolutely-no-question needs to be that long, no worries. As many people have said, a good book is a good book. But if I’m trying to convince someone to publish that book, their absolute first thought at seeing ~255K words on the cover page is going to be that my manuscript needs a bunch of editing. And the first time they hit something excessive or irrelevant... well, it’s all over then.

Y’see, Timmy pages are precious. My words are precious. I’m only going to get so many, and I don’t want to waste them. There are lengths and sizes for books, and for different genres, and if I shoot straight past those limits with a manuscript two or three times the accepted size... Well, look. It’s not going to be their fault when I’m immediately rejected.

Next time, I’m going back into the A2Q to talk about settings.