Pop culture reference.  Very funny video.  Even Spielberg liked it.
Well, in the way of my people, I’m spending the day before Valentine’s Day back at the dentist.  New teeth.  That’s weird.
Which made me think about love. Mostly, how much I love painkillers...
But you don’t want to hear me whining again...
A lot of folks were horrified or—depending on how your particular ship sails—vindicated a few weeks back when J.K. Rowling announced that she probably shouldn’t’ve had Ron and Hermione get together as a couple at the end of the Harry Potter books.  Definitely not as a “they lived happily ever after” couple.  In retrospect, she felt she’d forced the relationship and it didn’t feel believable.

Now, granted, she’d been slowly pushing things that way for four books, so it’s not like this came out of nowhere.  But I can kind of see what she’s saying.  It made for some interesting articles and assumptions online.  And also gave some validation to my Harry and Luna Lovegood theory...
Everyone loves a good romance because we all love the idea that there’s someone out there who’s a fantastic match for us.  A soulmate, if you will.  It’s a relatable idea.  And when we can relate to something, as readers or audience members, we can believe it.
However...how often have you been reading a book or watching a movie when suddenly, out of nowhere, two of the characters started professing their mad love for each other?  Few things can sink a story faster than a pasted-on love interest, because none of us like fake emotions.  It makes people roll their eyes while reading books and it makes movie audiences laugh.
So, let’s revisit a few simple rules that can help make a love for the ages... 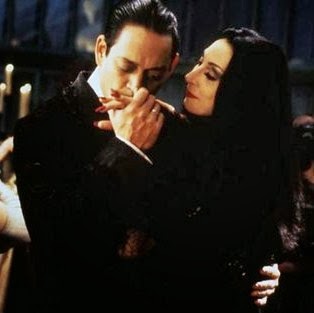 The First Rule of Love --  Like I just said, love needs real emotions, and I can’t have real emotions without real people.  And real people, oddly enough, act in realistic ways.  I’m not saying rational ways, because love is one of the most irrational things most of us will ever encounter in our lives.  If my characters are real, though, they’re going to have needs, desires, plans,and tastes.  And it’ll stand out if they make choices that go against those traits.  Yes, opposites attract—they even have a lot of fun together—but if we’re talking about real emotions, odds are these two are going to have more in common than not.
In other words, the career-minded conservative banker probably isn’t going to make long term plans with the quirky socialist art student.  Not unless he’s trying to get her to sign over her grandmother’s art studio or something.  Although... maybe he’s a failed artist himself, and she reminds him of another path he could’ve taken.  Having past conflicts and secrets can make a character seem real, too.

Even then, how far and how fast they take things should be consistent.  Some folks live in the moment.  Others plan every day in half hour increments.  People can be confident or nervous, experienced or awkward.  Some people are tearing each others clothes off half an hour after they meet, while for some the huge moment might be that tentative kiss on the third date (if it’s really a date, because that first one was just coffee—not a date!).
Simply put, my characters need to be believable if their relationship is going to be believeable.
The Second Rule of Love  --  If you’ve ever been in a situation where friends are offering advice and pushing you to say something, you know the real result is it makes you want to get away from the object of your potential affection.  Nobody likes feeling forced into something, and we don’t like to see other people forced into things.  That’s just human nature.
Now, for the record, “other people” includes me, the writer.  Characters need their own motivations.  I can’t just have them do things for the convenience of the story.  If I’ve based my whole story around the mercenary and the archeologist saving the villagers out of mutual respect for each other, then I need a real reason for them to get together (as mentioned in the First Rule).
And no, the reason can’t be something like “because they need to face the gargoyle lord as a unified couple in chapter fifteen.”  It also can’t be “I need a sex scene to hold people’s attention.”  If this is the basis of Wakko and Phoebe’s relationship... well, they probably won’t be celebrating any major anniveraries.  Not with each other, anyway...
To sum up-- People get together because they want to get together, not because other people think they should be together.

The Third Rule of Love – This one could actually count as real-world advice.  Don’t confuse sex with love.  There are lots of points in a story where it might be completely acceptable for two characters to have sex.  We’re all mature adults here (not counting you two), and I’m willing to bet most of us have had sex with someone we weren’t madly in love with at the moment... or at any time later.  Sex is fun.  It’s a stress-reliever.  It lets you not think about other things.  Heck, it can even keep you warm.
Sex doesn’t always translate to love in stories any more than in the real world, though.  If two characters fall into bed (or up against a wall, in a closet, out in the woods...), I need to make sure I’m clear what it means for both of them.  Forcing something casual into something serious will just read as forced (refer to the Second Rule).
So... sex and love are not the same thing.
The Fourth Rule of Love-- This is the tough one, because Hollywood keeps trying to insist otherwise.  How often have you watched a movie where you can immediately spot “the love interest” as he or she is introduced?  It doesn’t matter what kind of film it is or what’s going on, it’s easy to pick out him/ her the first time we see them.  In screenwriting, this moment’s often called the “meet-cute.”
Y’see, Timmy, a romance doesn’t always fit in a story.   Someone could be wounded, fighting for their life, or so scared they’re an inch away from a heart attack.  Maybe they’re already in a relationship with someone else.
Forcing something in these situations also poses the risk of making one or both characters very unlikeable.  There was a very odd movie a few years back where the main character develops feelings for his brother’s fiance over a long weekend—and they both act on them!  It made it hard to feel sympathetic toward either of them.  I also read a manuscript once where the two protagonists start feeling urges toward each other while they’re searching for the woman’s abducted daughter.  Not years-back abducted, mind you—four hours ago abducted and possibly at great risk.  But, wow, doesn’t this private detective have a nice smile and great arms...?
In ten words or less—sometimes it’s just not going to happen.

So there are the rules.  Now go forth and spread the love.
Where appropriate for your age group, of course.
Next week, I might just say something quick, if I can find the right words.
Until then, go write.