Oh, there you are.

First off, many thanks to all of you for your patience.  The new book’s been especially troublesome and I’ve been banging my head against it for a few weeks.  Plus there’s a bunch of other stuff going on that’s been taking away valuable pontification time...
Anyway, I hope you found some of the screenwriting interviews mildly interesting.  Just as a warning, there may be one or two in the near future.  But, for the next few weeks, I’m back with actual posts.
So, what am I talking about with that amazing, pop-culture title?
Well...
Tony Faville is one of those guys you read about in books.  He’s just had way too interesting a life to be a real person.  He signed up with the Navy and went into the medical corps.  He became a combat doctor and was assigned to the Marines, where he was on the ground for the first Iraq War (the one started by the smarter Bush).  When he got out of the Navy, Tony decided to become a chef and ended up working for several restaurants.  And after years of doing that, he decided to start writing novels and produced fun stuff like Kings of the Dead

and the Avery Nolan supernatural detective series.
Like I said, way too interesting to be real.
A few months back I was at a convention with Tony (we’ve got the same publisher) and overheard him making a wonderful analogy.  Someone was asking about how to do something, and—as I’ve done a few times--Tony related being a writer to being a chef.  As he explained it, there was one question he’d get all the time from people as they started working with him.
“Chef, what’s the best knife for me to buy?”
I’m now going to paraphrase Tony’s answer. 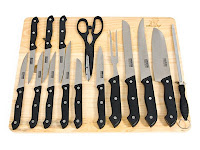 Start with the cheapest knife you can find and work with it for a while.  See how it fits in your hand, how it feels when you cut different things.  If it’s not comfortable, toss it and move up to the next knife.
At the end of the day, no matter who makes it, no matter how much it costs, there is no right knife.  There’s just the knife that’s right for you.  So why spend months struggling with a $300 knife when there may be a $20 one out there that was made to fit in your hand?
Y’see, Timmy, that’s a lot like writing.  You’ll hear a lot of people offer their advice.  Some of them may insist things must be done this way.  But in most cases, writing boils down to what works for you.  If I need to outline the whole story before I start writing, I shouldn’t waste my time trying to be spontaneous.  If I write better at night, it doesn’t matter how many people say to start with five hundred words before breakfast.  If I need to dress up like Spider-Man to write...well, hopefully I look good in tights, but it really doesn’t matter because I’ll be at home writing.
One of the most important things to do as a writer is to recognize all the optional hints and suggestions for what they are and just weed out the useless ones that don’t apply to me.   Like those television cooking shows that are more about getting you to buy a $300 dollar knife, a $150 measuring cup, and are so glad that last commercial has got you thinking about becoming a chef.  No matter what anyone says, no matter who says it, all that matters is what works for me.  That’s the golden rule, and I’ve brought it up here a bunch of times.  What works for me won’t necessarily work for you, and it definitely won’t work for that other guy.
Yeah, like cooking, there’s still a lot of things I will have to do.  It's the difference between methods and actual rules.  I need to have some kind of knife, and I need a basic understanding of grammar.  I don’t want to serve undercooked eggs or pork, and I also don’t want every page to be a pile of misspelled or misused words.   I have to add ingredients in a specific order to get a certain taste, and I need to structure sentences and paragraphs to tell a certain story.   I’ve got the freedom to choose whatever knife I want, and to cook whatever I feel like, but that doesn’t mean I can thrown anything I want in a pot or frying pan and people are required to show up and eat it.  I’ve got to cook something people want to eat, and I can’t complain if I’m writing something nobody’d want to read.
So don’t waste your time trying to find the perfect knife.  Just find the knife that works for you.
Speaking of cutting, next time I thought I’d talk a bit about some quick edits I always make when I dive into later drafts.
Until then, go write.