This Week, On A Very Special “Writer on Writing”

I’m sure most of you reading this are familiar with the title of this week’s little rant. Nowadays it’s just useless marketing hyperbole. I mean, really, is every episode of Gray’s Anatomy that powerful?

If you watched television as a kid, though, you knew that phrase was a hidden message from the network. We all knew “on a very special episode of...” really meant “this week’s episode is going to suck.”

Because “on a very special episode of...” meant this week wasn’t going to be about laughs or action or something enjoyable. It was going to be about a message. A message that, more often than not, was wedged and crammed and kicked into the episode until it fit. The characters were going to talk about racism or bigotry or death or drugs or sex or something else that just did not fit the tone of the show. Those episodes always felt awkward and forced because they disrupted the storytelling rhythm the shows had established.

I’ve seen scripts about people sinking deeper and deeper into addiction and dragging their friends and loved ones down with them. There’ve been more than a few stories about people who mess up the priorities of their lives and later come to realize what’s really important. I also read a story about the ghosts of aborted children haunting a clinic worker until he leads a crusade against his evil and sadistic employers. For the record, they really were evil and sadistic, and would keep a running tally of which doctor could abort the most babies in a day. I am dead serious about this.

I was even given one deeply disturbing script where a cute young woman came to realize that the real problem with America today was “all the coloreds moving in everywhere” and how much better off everything would be if we just got rid of them all... y’know, for the good of the country.

Yeah. I probably would’ve called the FBI about that last one if there’d been contact info on it. Needless to say, I gave them a low score.

Now, before anyone freaks out, there’s nothing wrong with having a message in your story. Most of the best stories do, on one level or another. Problems arise, however, when the writer approaches things from the wrong end, like some of the folks above did. 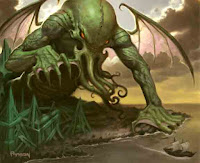 Here’s a simple test. If your story or script has a message in it (God is good, illegal immigrants are bad, Cthulhu is really bad), at what point did the message come into it? Did it grow naturally from the idea for a certain character or scene? Or did this story start with the message, and then get fleshed out with minor things like characters, plot, and dialogue?

When a writer starts with the message, everything else tends to get slaved to that singular idea. Characters in these tales tend to have awkward or unbelievable motivations because the story isn’t about what these folks would naturally, organically do. Their decisions, actions, and reactions are bent to reinforce the idea that’s being promoted. So they often come across as puppets that all enforce the idea. In one of the examples I gave above, no matter what your personal views, does anyone seriously think the people who work at abortion clinics sit around twirling their mustaches and giving out Machiavellian cackles as they do their job? Of course not. If they didn’t, though, they’d weaken the message that particular story was written around. So the story suffers because the characters aren’t relatable or believable.

This leads into the next point, which is dialogue. When the message dominates, dialogue suffers. People will spout out emphatic monologues, and a lot of the time they just sound insincere. The characters just end up serving as a mouthpiece for the writer’s views and ideas. Like motivations, this makes their words become stiff and wooden. It also has a tendency of being very on the nose. Characters can’t be there just to parrot the writer’s viewpoint on different matters.

Now, I gave some vague examples above, but let me give you a specific one. Who’s heard of Robinson Crusoe? Most of you, yes? I’m also guessing most of you have read it in one form or another as well.

How many of you have read the sequels?

I’m not talking about spin-offs or modern takes or anything like that, mind you. I’m taking about the two sequels Daniel Defoe himself wrote to one of the most famous books in English literature. Crusoe ends by claiming this is the end of the first volume of his adventures, after all.

Did you even know there were sequels?

Most people don’t, and they reason they don’t is because the sequels are considered to be some of Defoe’s worst writing. Now that he had an incredibly popular character, he decided he had a vehicle to pontificate about whatever he felt like. So in the next two books, Robinson Crusoe basically complains about people a lot and makes snide comments about how much more virtuous he is than everyone else. The most believable part of the second book is when the crew of his ship get tired of this non-stop commentary about their flaws and decide to dump Crusoe on the next island they pass (how’s that for irony?). The third book borders on being a manifesto from Defoe, thinly veiled by Crusoe’s voice.

Needless to say, books two and three didn’t go over that well with anyone.

Y’see, Timmy, your story can have a message, but it can’t be about the message. The message needs to serve the story, not the other way around. When it gets skewed like that, the writer ends up with something on par with one of those silly “Chick tracts” that tried to show how Dungeons & Dragons always led to suicide and Satanism. Not necessarily in that order.

And nobody here wants that, right?

Next week, I want to talk to you medieval primates about my boomstick.