All right you primates, listen up. This is my BOOMSTICK!

The twelve-gauge, double-barreled Remington-- S-Mart's top of the line. You can find this in the sporting goods department. That's right, this baby was made in Grand Rapids, Michigan and retails for about $109.95. It's got a walnut stock, cobalt blue steel, and a hair trigger.

The great advantage of the shotgun is that it’s very hard to miss with one. Load a few shells of buckshot and you can pretty much guarantee you’ll hit whatever reanimated dead thing you’re more-or-less aiming at. Heck, even if you’re not sure what you’re aiming at, you’ll still probably hit it. You won’t hit it with full force, granted, but with that amount of spread you will hit something. And if you’re lucky and hit enough of it, you’ll do more than slightly annoy your chosen target.

With that being said, I’d like to tell you a story...

It’s the story of Yakko Warner, a young man who wanted nothing more than to grow up and be on the Olympic pie-throwing team. It was his dream for as long as he could remember. But then, in the womb, tragedy struck... 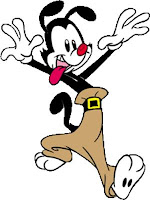 Yakko was diagnosed with Sudden Infant Death syndrome and Alzheimer’s. Despite this, he fought on, born an orphan just two years after his parents were killed by a drunk driver. Working his way through private school and an ivy-league college by collecting deposit bottles every night and weekend, he graduated and became an alcoholic writer, artist, and musician on the same day he discovered he had AIDS, brain cancer, and Lou Gehrig’s disease. The next day, a random gang shooting killed his pregnant wife and four-year old son and left him crippled and in a wheelchair.

Yakko decided to become a teacher, in the hopes his story would inspire inner city autistic children to stay out of gangs. Alas, his students were all killed by drug dealers, crooked cops, homophobic bigots, racists, tragic suicides, random household accidents, and Somalian pirates.

Finally, on the day Yakko went to pick up his Academy Award for General Excellence, he was killed by a drunk driver. Ironically, the same drunk driver who had killed his parents five years earlier. As he bled out in the gutter, waiting for an ambulance that was delayed because Republican politicians he’d backed had slashed health care bills, a dove landed nearby. Then--as he stared at the bird and realized he’d wasted his life in books when he should’ve been out there living-- Yakko died the most painful, agonizing death ever imagined.

Okay, you’re probably chuckling a bit, but what might be hard to believe is how common this kind of storytelling is. I saw it in writers’ groups in college (part of the reason I don’t belong to such groups anymore) and countless times when I used to read for screenplay contests. You wouldn’t believe the number of dramatic stories that are just brimming with excess plot devices and story threads.

This all springs from a common misconception--that writing a bunch of plot points and character elements is the same thing as writing a story. The logic is that if I load up my story with every possible dramatic cliché for every single character, one of them’s bound to hit the target, right? And then, eventually, the story will be dramatic. Plus, adversity builds character, therefore it stands to reason all this extra adversity in my story will make for fantastic characters.

I mean, Yakko comes across a dramatic, dynamic character, right...?

In all fairness, it’s not just the dramatic types looking to create literature and art who do this, although I must admit, they seem to be the most common offenders. I just read a book a while ago that puts the old action pulps to shame. Every punch drew blood, every car chase (or skimobile chase, or quad-runner chase...) ended with an explosion, and every leap rattled bones. Not only that, but every character had a snappy one-liner to toss out before, during, and after offing one of the villains. And there were lots and lots of villains...

There’s also the horror story that has blood and gore and chunks of flesh everywhere. Well, it would be everywhere except the story is told in complete darkness. Plus there’s a little chalk-skinned child who moves in high-speed “shaky vision” and the borderline psychopath and the one person who isn’t a psychopath but snaps anyway and gets dozens of people killed because he or she opens a door or invites something in or plays with the puzzle box.

Don’t even get me started on the sci-fi stories that have epic alien wars and ancient technology and sacred orbs and unstoppable monsters and long-prophesied, godlike, cosmic beings and cyborg ninjas and out-of-control nanites. God, I hate nanites. You’d think they’re more common than bacteria, the number of stories they show up in...

Y’see, Timmy, whatever your chosen genre is, just loading up with plot elements and blasting away with your No.2 shotgun does not create a story. That’s called mad libs, and it’s the opposite of writing in just about every way possible.

Which brings us to the flipside of using a shotgun. At close range your shot will definitely hit. It will hit with everything. And when that happens, you will completely annihilate your target. Nothing left but rags.

Take that as you will.

Next week I have a ton of deadlines so I might not be able to post anything, but if I do it will be pure magic, as always.