Bonus points if you know this week’s historical pop-culture reference.

We’ve all got our own ideas for what’s funny. Mine may not match up with yours and yours may not match up with hers. I loved (500) Days of Summer, but I also love Super Troopers and reading some of Woody Allen’s old essays. On the flipside, I was never that impressed by the Wayans Brothers movies, Beavis & Butthead, or the Three Stooges. Yeah, I don’t know why, but the Stooges just never did it for me. Maybe I got a bad first impression somewhere along the way or something.

Comedy’s a tough thing to define or give lessons on because of this. A few noted funny people have pointed out this little truth-- tragedy is when I stub my toe; comedy is when you fall down a hole and die. Several pros say it’s one of the hardest things to pull off. As such, it’s good to be highly skeptical of anyone offering you simple rules and guidelines on how to be funny, because odds are they’re either a scam artist trying to make a buck off you or some idiot rookie who doesn’t know anything.

So, that being said, here are a few rules and guidelines on how to be funny. Please don’t forget to shop the great Amazon links to the right and down below once you’re done reading them.

Let’s see if I can give you something a bit more solid to work with. 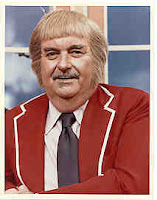 I can’t remember all the details, but there was a Captain Kangaroo special that had the Captain and his friends out of the studio and off on some adventure. There was a story, a mystery, the whole deal. I want to say it was set in Australia for some reason. Anyway, during the course of it, Captain Kangaroo gets sealed in a big oil drum and placed on the back of a truck. Said oil drum bounces off the truck and begins to roll down the largest hill in the world (it may have been Mt. Kilimanjaro, a well-known Australian landmark). Every few moments it would hit a rock or bounce over something and the Captain would let out another pitiful wail or cry for help. After what seemed like about nineteen and a half hours, the oil drum came to rest at the bottom of the hill and his friends pulled the unharmed-but-dizzy Captain Kangaroo free to wobble around on shaky legs.

Horrifying. Thirty five years later and I can still hear his screams echoing inside that drum.

Why was it horrifying, though? I mean, the same kind of gag happened on Scooby-Doo on a pretty regular basis. Abbot and Costello did it once, if memory serves. I’ve seen it on The Simpsons a few times since then, too. Granted, I was a timid little kid, but what about this particular instance made it so scary?

The catch (and the focus of this week’s little rant) is the setting.

Television has the term “situational comedy” better known as a sitcom. It’s the idea that these people in this setting will be funny. Truth is, though, all comedy is situational. It depends on the audience and it depends on the setting.

There are jokes I’d tell my friends that I wouldn’t tell my parents. It’s funny when Kenny from South Park falls in a microwave and dies, but it’s a bit cringe-inducing in Kick-Ass. And while it’s laughable when Shaggy and Scooby get rolled away in an oil drum, it’s nightmarish when the same thing happens to Captain Kangaroo.

Y’see, Timmy, certain types of comedy work in certain types of stories. Once you’ve established the tone of the story you’re telling, you’ve also established what kinds of comedy will work with it. You can’t swap jokes back and forth between different material with no problem. If I try to lift a gag from The Office and drop it into Ferris Bueller’s Day Off or maybe one of Eddie Izzard’s routines, it’s not going to work. On a similar note, you can’t swap funny characters back and forth, either. A writer can’t just add in a bit with a dog or a fart gag and expect that their story is funny now. Granted, Hollywood’s determined to prove me wrong on this, but so far the evidence is stacked in my favor.

In my opinion, this is one of the big tricks to being funny, and also the reason most attempts at comedy fail. Writers set up one type of world and then pepper it with a different style of humor that clashes with that world. It’s mismatched ideas and tone.

Okay, I know I said I wouldn’t talk about comic theory, but let me dip my toes in it just for a moment...

Comedy needs to be believable, by which I mean within the context of the given world or story. Just like a good mystery or most genre stories, the audience has to believe in the situation and the characters--again, within this context-- in order to relate to it. Something unbelievable isn’t funny. It’s just odd and it usually gets a very different response then what was intended.

This is when “humorous” bits become aggravating or disgusting or even terrifying. They’re alien forms of comedy for the established world, so they aren’t seen as comedy. A slapstick gag is awkward and out of place in a serious dramatic story. Likewise, a touch of wry, understated British humor isn’t going to go over well in an episode of Jackass.

Which is also what happened to poor Captain Kangaroo. He existed in a world of storytime, simple lessons about friendship, and Mr. Greenjeans stopping by to visit. It was a world where the biggest threat he had to deal with is getting a shower of ping-pong balls. When he suddenly gets stuffed in a BP oil drum and rolled down Mt. Kilimanjaro, that’s breaking the rules of that world. It’s not supposed to happen and so it isn’t funny--it’s just a pleasant, grandfatherly man being subjected to a horrific experience.

Know what type of story you’re writing and make sure the tone and type of jokes match the world you’ve set up. I’m not saying following this rule makes all writing funny. I do, however, feel safe saying that not following it will stack the odds against a story. Consider it more a rule of thumb that you’re probably safer going along with than not.

Next time, I’d like to introduce you to my cat, Cheap Shot.