Oh, hi there. It’s been a while. Sorry about that. Piles of stuff going on. I won’t bore you with it all now. Not when I can save some of it for later ranty blog posts...

I have, as some of you know, gotten back to my Saturday geekery. And a while back, during one particularly clumsy movie, I tried to explain a few thoughts about basic storytelling. Twitter’s not always great for nuance, though (sorry you had to find out this way), and I realized pretty quick I wouldn’t be able to talk about this in a way that did it justice. Or didn’t invite a few dozen people to leap in and say “Well, actually...”

So let’s go through this real quick. 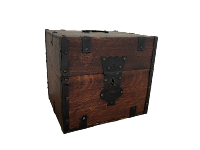 I’m sure most of you have heard the whole “there are only seven basic plots” thing. Or maybe it’s nine. Depends on who you ask. Thing is, when we really get down to the bones of it, there’s only one plot. Ultimately, it all comes down to something makes today different from every other day. Something happens to make today noteworthy and forces my hero to do something different than usual.

I’ve talked about this here on the ranty blog before, and from a few different directions, so I won’t get into it too much. It’s pretty straightforward though. Something happens = story. Nothing happens = no story.

If I’m writing a longer-form thing—maybe a book or a feature-length screenplay—I’m probably going to have more than one moment like this. My hero’s day will be different and just as they’re adjusting, getting used to things again... something else happens. Like, we found out what was really going on, but then later we found out what's REALLY going on.

Believe it or not, I just slipped a really important thing in there. And it’s the thing I was trying to talk about on Twitter, but knew I wouldn’t be able to without someone jumping in before it was fully explained. And probably accusing me of hating art or loving Hitler in the process. Because Twitter is also very impatient.

The really important thing is that once the thing happens (however many things I have), my hero needs to accept it. They can have a few scenes, maybe a chapter or three of shaking their head and denying things, but ultimately they need to admit this is the new normal. It’s really important they move on, for a number of reasons...

First, if my characters never adjust to the new normal, they get annoying. Fast. Heck, the real world’s spent a year and a half now showing us how much people in denial can get on your nerves. We’ve all seen films where the vampire drops out of the sky, kills somebody, drinks their blood in front of their group of friends, explodes into a cloud of bats... and yet there’s still that one guy insisting vampires aren’t real. Can’t be real. Nope. What, Yakko’s dead too? Still not vampires! Nineteen people killed in front of us one by one? This isn’t happening. Not happening and definitely not vampires.

I’m betting you started to skim that, right? Because that character’s a bit eye-rolling. And this was just a couple of lines. Imagine three hundred pages of that guy. Yeah, there are times I may want an annoying character in the mix, but there’s usually not more than one and it’s very rarely my protagonist.

Second, if my characters don’t adjust and get accustomed to the “new normal,” my increasing challenges are going to be more and more difficult (because my challenges are increasing, yes?) If my character’s not growing and changing, they’re quickly going to be outmatched by the world around them. I’m going to find myself writing things that just aren’t believable. Sure, Dot took out one hitman by sheer luck, but if she never accepts she’s now part of the assassins’ union and develops past that, how are my readers supposed to accept her lasting ten seconds against the Grand Emperor of Death? One of the reasons challenges grow and increase in stories is because my characters are growing and becoming more capable of dealing with things.

Third, is that we all instinctively feel this progression of story and plot. We’ve been trained by years of reading and watching stories. So if my character doesn’t change and grow and adjust to this new view of the world... their story kind of stalls out. And that throws my whole structure off balance. We can’t always identify it, but we can feel it. Something in this book or movie has dragged to a halt. At the very least it hasn’t progressed as far as it should’ve. You may remember we talked about when this happens in television shows--they call it the Moonlighting curse.

Hopefully it’s clear why this moving on is important, but let me toss one more thing into the mix for you to mull over. Why this is so very important in longer works. And to do this... I’m afraid I’m going to have to use some terms that may make some of you uncomfortable.

I’ve talked before about three act structure. We establish the norm, we introduce conflict, and we have a resolution. You remember all that, right?

Okay, well that moment we introduce conflict? More-or-less the start of Act Two? Guess what? That’s when something makes today different than every other day. We could even call it... the inciting incident.

Sorry if that made your skin crawl a bit.

And remember how I said longer-form stories generally have another moment like this? A second time my protagonist gets their legs kicked out from under them? What to guess when that happens?

But if my protagonist isn’t accepting the thing that happened, if they spend all of act two in denial... well, that gets messy. Because there’s going to be that annoyance factor, yeah. But also we’re going to hit act three and, well... out hero’s not really ready for it. They’re still shaking their heads and refusing to believe that inciting incident stuff (again, sorry).  The bulldozers are out front and heading for the barn, but my protagonist is still insisting there’s no way Jerry from the bank would’ve foreclosed on our farm...

When this happens... well, it usually means one of two things. Either I’ve picked the wrong character to be the hero of my story... or I don’t really have a story. I mean, that growth and progression is pretty much the defining aspect of a character’s story, so if my hero’s spent the last hundred pages with their head in the sand, it’s probably a warning sign something’s gone really wrong.

It’s pretty hard to deny that.

Next time, I’d like to address another geekery issue and talk about really stupid attempts to save the cat.