So very sorry I missed last week.  I’ve been trying to get this draft finished before Thanksgiving and last week just kind of sped by before I realized it.  My apologies.
Also, thanks to all of you who sent me suggestions for topics. I think the rest of the year is filled up kind of nice, but if you happen to be reading this and still have some things you’d like me to blab about, feel free to mention them below.  I’m always up for more writing-related ideas you’d like to hear about.
On which note...
Thanksgiving.  A holiday we in the U.S. equally love and dread.  Love because... well, lots of food, friends, and family.  Maybe some booze and a lot of old black and white movies, or football if that’s your thing.  Perhaps a Twilight Zone marathon.  All wonderful things to enjoy on this feast day of thanks.

Dread because... okay, let’s be honest.  The in-laws are kind of political zealots.  It’s almost impossible to have any discussion with them that doesn’t hit “those crazy liberals” within five minutes.  Your cousin’s significant other, the would-be-chef, is going to have lots to say about the turkey (and the stuffing, and the pie, and the potatoes, and...).   And if Uncle Randy has a third glass of wine (he says it’s just wine, anyway)... well, that’s when all the dark family secrets start coming out.  Some of them are even true.
Granted, it’s not like these people are actually evil.  They’re not villains.  Okay, yeah, Uncle Randy had a brief stint in jail but that was over parking tickets (he says he was protesting the state government).  And two-thirds of the sentence was reduced to time served.
But, seriously, they’re not villains.  They’re not what we’d think of as “bad guys.”  They’re just... kind of annoying.  Closer to obstacles than enemies.
So let’s talk about antagonists for a few minutes.
I’ve talked before about bad guys and antagonists.  About how my story often needs someone to oppose my hero or heroine, even if that someone is just standing in for a larger, less defined opponent.  An IRS agent can represent the government.  A junior executive can represent big business.  A doctor can represent a debilitating condition or perhaps even death.
These people aren’t necessarily villains, though.  They may be working—or seem to be working—against my protagonist, but it’s not like they’re up to some nefarious plot.  Oh, sure, they could be, but in most of these examples, they’re probably just people doing their job.  I’m sure pretty sure most IRS agents aren’t gleeful about telling poverty-stricken people they messed up some forms and owe thousands of dollars.  I have a good friend who’s a doctor, and she’s never mentioned getting overly excited about telling people they’re going to need an organ transplant.
And yet... we still tend to see these people as a challenge to overcome.  Someone we have to beat or prove wrong.
This isn’t exactly a unique thing.  Having antagonists who are also (on some level) good people is a very common plot device.  Especially once we bring in police, soldiers, doctors, and even government agencies. Yes, even in this day and age.  So my hero has to deal with antagonists that are basically... well, heroes in their own right.
For example, let’s take a look at a classic antagonist from one of America’s iconic folk tales, one that’s been produced for film and television. 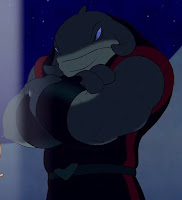 Captain Gantu from Lilo & Stitch.
Gantu (voiced by the super-talented Kevin Michael Richardson—seriously, check out this guy’s resume) is the chief antagonist in the movie.  He imprisons Stitch at the beginning of the movie, tried to ship him off to what amounts to eternal exile on an asteroid, and then—after Stitch escapes—Gantu hunts him down to make sure that sentence is carried out.  Although his attitude at this point could loosely be described as... well, it wouldn’t be stretching things a lot to say “dead or alive.”
But... is Gantu really a villain?  He is Captain Gantu, after all.  He’s risen through the ranks to be an officer of the Galactic Federation, and he’s the right hand man of the Grand Councilwoman.  When he goes after Stitch, it isn’t a personal vendetta—he’s following his leader’s orders to enforce the law.  Stitch is, after all, a fugitive from justice who’s broken even more laws by escaping to Earth.
So Gantu’s definitely the antagonist of Lilo & Stitch.  And he’s a bit overzealous, yeah.  Maybe even a bit prejudiced against lab-created life forms.  But he’s not exactly a villain.
Which means... what, as far as we’re concerned?
Well, first off, this is an empathy issue.  As the writer, I have to be able to see things from Gantu’s (or Uncle Randy’s) point of view.  There has to be more to them than just “opposed to my protagonist,” especially if they’re not a villain... I might want it to be more on the positive side.  Is my antagonist doing this out of a sense of duty—even a misguided one?  Are they a reluctant antagonist?  Maybe it’s a lesser-of-two-evils situation?

Keep in mind, this doesn’t have to work both ways.  While my readers need to have some empathy for the antagonist in this case, my antagonist doesn’t necessarily have to have any for my hero.  After all, in their eyes, there’s a good chance my hero is “the villain,” and should be treated as such.

Second is that these antagonists actually need to be good people. If we find out Gantu’s in charge of the Galactic Federation’s concentration camps, or that the in-laws regularly firebomb Planned Parenthood offices and burn crosses on people’s lawns... well, they really are villains, then.  Again, empathy. If they’re going to be good guys then they need to be good guys.  Their actions may be antagonistic towards my hero or heroine, but it should still be clear to my readers they’re decent people at heart.  At the least, they're just trying to do their jobs.
Also, something related to keep in mind here—something a writer-friend of mine was recently wrestling with.  If my antagonists are secretly good guys, if this is a twist that comes out somewhere in my third act... well, like any good twist, things still have to line up.  It’s going to be hard to reconcile a last minute “we’re actually the good guys” after 300 pages of murdering innocent bystanders and torturing supporting characters.  If I need my readers to misunderstand the antagonist’s earlier actions... they need to be actions that can be misunderstood.  It’s really tough to come back from shouting a bunch of racist, xenophobic slurs at strangers or shooting schoolteachers in the head.
Y’see, Timmy, all I have to do is make them good people and have a little empathy.  If I have a real conflict, everything else should fall into place.  Or pretty close into place.
Assuming I have solid characters.  And an actual plot.  And good dialogue. And... you know.
Happy Thanksgiving, if you’re here in the states.  Hope tomorrow’s a peaceful and pleasant day for you, wherever you are.
Next time... a great mystery tip.
Until then, go write.