Welcome back.  Glad to see you all survived the violent transition to 2016. 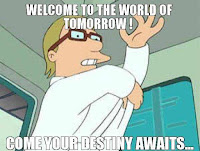 I like to start the year by going over what this pile of rants is for and why I do it.  I think it’s good for any of you who’ve stumbled across this page.  It’s also good for me, to help stay focused on helpful tips and suggestions and, yes, the occasional rule.
That’s more or less how this started, almost nine years ago now.  At the time, I was writing for a screenwriting magazine, and I’d see tons of articles and websites about tricks and gimmicks—the sort of stuff you worry about after writing.  I’d guess at least two-thirds of writing articles, even in our own magazine, fell into this category.  Stuff like how to get an agent or manager, how to aggressively network, how to arrange book signings, that sort of thing.  Most of which seemed like... well, like it was skipping a few steps.
And some of these folks were asking to be paid for their pearls of so-called wisdom.
So, I went to my editor with a few spec columns about... writing.  Some basic things I’d written up based on my own years of many failures and a few successes (or, as some folks call it, experience).  And the columns were rejected.  A few months later I went to another editor, he passed them up the chain, and they were rejected again.  Those three columns became the first posts here.  I’d tossed them up just so it felt like I’d done something with them.  I thought they were fairly well written and made some good points—I didn’t want them to languish on my computer.  Maybe in the tiny, limited space that was the internet somebody would stumble across them and find them useful.
(Bonus fact. Maybe a year after I started posting here full time somebody pointed out Thoth-Amon was also the evil sorcerer in the Conan books and comics.  Completely slipped my mind when I picked the name for the site.  I just went with it because Thoth was the Egyptian god of writing)
Anyway, as I worked my way further into the life of a full-time writer, I was exposed to more and more people’s work.  I read scripts for a couple different contests and got a bunch of exposure to it (reading 400+ pages a day will do that to you).  And it struck me that I kept seeing the same basic mistakes.  Often to wince-inducing levels.
Okay, so this is just my own experience, but at this point my experience is pretty broad so I feel good about saying it...
Most aspiring writers fall into one of two camps.  Some think writing and storytelling are mechanical, quantifiable processes that can be broken down into solid rules and formulas.  These are the folks who will use Syd Field as proof that their screenplay is perfect and quote the MLA Handbook to explain why their novel deserves to be published

The other group think rules are for old-school losers who don’t get that spelling, formatting, and structure just hamper the creative process and will get overlooked when people see the inherent art in the writing.  Nothing matters past the pure art of words flowing out of their fingertips.  Because we all have fantastic stories to tell.  Don’t know how to spell that word?  That’s what spellchecker’s for.  Don’t know what the word means?  Well, they’ll get it from context.  Not in the mood to write? Then just wait for the muse to strike.  Someone said bad things about your writing?  Ignore them, what do they know?!  Nothing matters except being happy about your writing.

Both of these groups are usually wrong, for the record.
Note that I said “usually.”  Most folks think it’s all-or-nothing.  You have to be on one extreme or another.  The truth is that it’s more of a middle ground.
Y'see, Timmy, there are correct and incorrect things in writing. I have to know how to spell (me—not my spellchecker).  I have to understand grammar.  I need to have a sense of pacing.  If I’m writing a script, I’ve got to know the current accepted format.  As a writer, I can’t ignore any of these requirements, because these are things I can get wrong and I’ll be judged on them.
On the other hand, there is no “right” way to start your writing day or to develop a character.  There’s only the way that’s right for me and my story.  Or you and your story.  Or her and her story.  This is the Golden Rule that I’ve mentioned here once or thrice.  If I ask twenty different writers about their method, I’m going to get twenty different answers.  And all of these answers are valid, because all of these methods work for that writer.
But that still doesn’t mean I can ignore every convention or rule I don’t like. I need to understand the rules if I want to break them successfully. Yeah, maybe there are ten or twenty people who broke the rules and succeeded... but there are hundreds of thousands, probably millions, who broke the rules and failed miserably.

And that’s what I try to do here.  Talk about writing.  Not the after-the-fact-stuff, just writing.  I talk about rules that we need to learn and follow (until we’ve got the experience to bend or break them).  I try to offer some various tips and suggestions I’ve heard over the years that may (or may not) help out when it comes to crafting a story.
I have a few topics on deck for the weeks ahead.  Author visibility.  Action.  Inside jokes.  Stakes.  Motives.  A few others.  And if there’s something that’s been gnawing at you that you’d like me to blab about, let me know down in the comments.  I’ve been doing this for a while—there aren’t many topics I haven’t had a painful learning experience with, and I’m always willing to share.
Oh, also... if you happen to live in the southern California area, I’d like to recommend the Writers Coffeehouse.  It’s a monthly meeting of writers of all types and levels to talk about... well, writing.  All aspects from first ideas and editing to pitching and marketing.  It’s free, it’s fun, and it’s open to everyone.  Jonathan Maberry (author of the Joe Ledger series, the Rot & Ruin series, and many others) brought it with him when he moved to the San Diego area, and he hosts a Coffeehouse the first Sunday of every month at the Mysterious Galaxy bookstore. And starting this month, on the 24th, I’m going to be hosting one here in Los Angeles at Dark Delicacies.
So check that out if you’re in the area.
Next time, I’d like to talk about lanterns.
Until then... go write.