Running a tiny bit late.  Trying to get a bunch of stuff done before the weekend and dealing with many disruptions and distractions.
Anyway...
I’d like to start this week by talking about  college.  It’s something I bet most of us here experienced, so it’s a great analogy for my real topic.  I’m sneaky like that.  Sometimes.
If you’ve been reading these rants for a while, you know I grew up in a very small town in Maine.  For high school, my dad got a new job and we moved to a somewhat large town (arguably a small city) in southern Massachusetts for four years.  And then I went to a giant state school for college.  No joke, my freshman dorm almost had more students in it than the entire school system I attended in Maine.  And I wasn’t even living in one of the larger dorms.  The college had a larger population than my hometown.
It was, needless to say, a bit overwhelming. 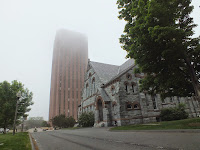 There were lots of orientations, of course.  Then I was introduced to tons of people in my dorm, and then people on my hall (we won’t even get into classes).  We all talked about ourselves a bit.  I think so, anyway.  It was all a bit of a blur.  For a while there were just the two skinny guys across the hall,  the woman with the short hair who smiled a lot, the big guy with the glasses further down the hall. But after a while details and names accumulated, these people became clear in my mind, and they became Mike, Jon, Karen, Henry, and so on.
Most of us can relate to something like this, yes?
When I’m introducing characters in my story, it’s a lot like this.  Sometimes things are a whirl of action.  Other times, everyone’s just sitting around studying each other.  Some people stand out—either on their own or because of my own interests—and other people just warrant rough placeholder descriptions for now.
Context is everything when I introduce a character.  In the middle of a firefight, Wakko may not notice much about the person who dives in to join him behind the barricade.  They’re wearing body armor and they have a rifle—score!  If he’s dealing with a job applicant, though, he’s got time to notice how sharp the creases are in the slacks, how the tie is knotted and the hair is combed, not to mention the smell of shampoo and the state of fingernails.
Likewise, during that firefight, there’s not much personal info Wakko needs to know past “you’re on my side, right?”  In the middle of the interview, he can ask “what are the three worst jobs you’ve ever had?”
And in either case, he might not learn about that tattoo or the special shirt or the naughty story behind her nickname.  Some things are only seen or discussed in more intimate situations.  These are all details that come out with booze or debriefing or sex or some combination of all three.
Y’see, Timmy, there isn’t a certain way or time to introduce characters.  It’s all a matter of context.  Context, and a bit of relevance.  I need to think of it in terms of my narrative and my main character (or the character I’m focused on at the moment).
At this point in the story, is there time to notice more than a few basic physical attributes about this new character?  Is there any one or two things about him or her that my point-of-view character might focus on for the moment?  Is there even time to trade names?  If there’s a lot going on, I don’t want to bring things to a crashing halt with a page of description or exposition.
I think one of the problems some writers have is they keep seeing examples of bad storytelling and character introductions in television and movies.  There’s an all-too common belief that things need to be frontloaded, that the audience needs to know everything about someone up front.  How many stories have you seen that begin with the “let’s all introduce ourselves” scene?  We learn their names and how they talk and their likes and dislikes and usually some clumsy anecdote about them or a blatant example of I’M THE UNSTABLE ONE!!!  GAHHHHH!!!
These scenes almost always feel unnatural because this isn’t how we meet people in real life.  Most of the time, we learn things about them in bits and pieces.  A little here, a little there.  Sometimes we never learn a character’s name, sometimes it’s the first thing we learn.  Some characters are willing to spill everything about themselves, others don’t want to know anything about you because it makes the job simpler.

Now, I mentioned relevance up above.  It’s a close companion to context.  My story may end up in a place where we can take the time to get to know someone, but that doesn’t mean I need to say everything there is to be said about them.  Yes, everything in a character’s life helps define them, rich tapestry, all that, but if it really isn’t relevant to the moment at hand, or the story as a whole, there’s a good chance it doesn’t need to be there.  Bob explaining that he had to slit the throats of sheep growing up on a farm is important when we’re choosing who has to fight in the wolverine pit, not so cool during speed dating.  And someone telling you their sexual fantasies might be very exciting on a third date, but it can be a bit creepy during a job interview (no matter who’s talking).  When someone does this in real life, it’s called oversharing, and it tends to make us uncomfortable because... well, we don’t need to know these things in this particular situation.
This can also help me weed out characters that... well, might not need to be characters.  If their introduction doesn’t fit in context, and the facts about them aren’t relevant... maybe I should question why they’re in my story here and now.  Maybe their introduction—or the full extent of it—should be pushed back or pulled forward.  Or maybe they’re just delivering the pizza and don’t have anything to do with the story at all.
It all depends on context.  And relevance.
And speaking of introductions, next time I’d like to go one step further and talk about dating.
Until then, go write.