2014!  Welcome to the world of tomorrow!  Just with no flying cars.  Or jetpacks.  And far less moonbases than Space: 1999, Inherit the Stars, or 2001: A Space Odyssey led us to expect.
Wow.  We’re only two days in and 2014 is kind of a letdown so far.
Anyway, as I often do at the start of the year, I’d like to take a minute or three to talk about this page and the kind of stuff I babble on about.  And touch on a few of the things I don’t.
And to do this, I’m going to dip my toe into a potentially controversial subject.  So hopefully I won’t offend anyone too much 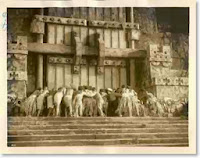 Actually, that’s an even better analogy.  Breaking rules is like demolishing buildings.  It looks simple, but the folks who do it actually need to know more than the people who built it.  They need to understand which walls are load bearing and which beams are supporting, but they also need to know how the material’s going to break or crumble or shatter and how much explosive is needed for each result without there being so much that the building collapses out rather than in.
Because it might look really cool and fun when the building collapses out across the city, but it doesn’t get a lot of repeat customers.
What else, what else, what else...
Do I repeat myself here?  Well... yeah.  Especially if you’ve been following along for two or three years.  I try to come up with new ways to approach the same problem.  Sometimes I’ll hear something new and clever that I’ll try to share, or maybe even expand on.  At the end of the day, though, this page is more like a mid-level class on writing.  You can take the same class twice and get more out of it, but by the third of fourth time there’s a serious case of diminishing returns.  I’m not saying any of you long-time followers should leave, but don’t be too surprised if I end up talking about dialogue or character voices or something like that.
Speaking of which, next time I wanted to talk about dialogue and character voices.
Until then, go write.