Happy 2013, everyone.  Hope you had a fantastic New Year.

As I often do at the start of the year, I wanted to blab on for a minute or three about what I try to accomplish with this little collection of rants and ravings.  And I think one of the best ways to accomplish that is to start off by mentioning a few things I won’t be doing here.
First and foremost, this page isn’t about “when you’re done.”  I’m always coming across blogs and message boards where people want to know what to do with their finished manuscript.  How do I get an agent?  How do I promote myself?  How do I get an "in" with a publisher?  Should I self-publish?  How do I get blurbs?
None of that here.
Speaking of which, I also don’t use this page for self-promotion.  I may mention stuff that’s new or noteworthy, but that’s about it.  No sales or contests or interviews (not with me, anyway).  There’s some Amazon links on the side, yeah, but those are almost more for credentials purposes than sales.
(Although if you want to buy them, I’ll never object to that...)
Not to sound harsh, but this page also isn’t for inspirational ideas, mindless encouragement, or a joyous celebration of art.  I’m not really big on the special snowflake, “we can all succeed” mindset.  To be honest, I think it’s one of the most damaging things out there on the internet.  I’m also not a fan of those folks who see writing as some wild, bohemian expression of art where there are no wrong answers or directions.  They’re not far behind the special snowflake people.  If that’s the kind of “advice” you’re looking for... wow, this is so not the place you want to be.
So, with all that out of the way... what is this place supposed to be about?
Well, it struck me many years back that there aren’t many places online to find actual help with writing.  Not useful help, anyway.  Yeah, all that other stuff is important, but the writing is the big thing.  Nothing else matters if my writing is sub-par.  I can do tons of research on surfboards, wetsuits, skegs, surf wax, wave formation, and all that.  Thing is, if I don’t take the first step of leaving Nebraska, that’s all pointless information.  If I don’t have a decent book or script, it doesn’t matter how much work I put into self-promotion.
I look around and I see a lot of folks making mistakes.  Sometimes it’s from inexperience.  Sometimes it’s from following bad advice.  And a few times... okay, sometimes I have no clue where people are getting their information from.  None whatsoever.
I also see some would-be gurus offering hard-fast “rules” for writing.  Your characters must do this.  This element of your plot must unfold by this page.  And it gnaws at me because they’re just plain wrong.  There are a lot of rules in writing, but it’s not all rules.  If it was,  writing would just be mechanical fill-in-the blanks (granted, it seems like it is for some people).  One of the biggest things to realize is which rules can and can’t be ignored.  It’s finding the methods and styles that work for you within the frameworks that work for everyone else.
That’s what this is all about.  Taking that idea in your head and fleshing it out and turning it into a few dozen or a few hundred coherent pages.  Hopefully pages other people will want to read all on their own without you begging or pleading or tricking them into it.
Heck, maybe they’ll even pay you for those pages.
So sometimes I point out the places where you really have to do this, but also the places where it’s entirely up to you.  Every now and then I’ll talk about a  recurring mistake I see a lot.  And most of the time I’ll just toss out a few ideas on how to work with (or work around) different issues that can come up when writing a short story or novel or screenplay.  Issues like spelling or structure or dialogue or characters or action or point of view or... well, there are a lot of them.
Anyway, what makes me qualified to say these things and toss out these tips?
Well, I’ve been trying to do this for over thirty years now.  I was stabbing at the keys on my mom’s old Smith-Corona before most of you ever considered writing as anything more than homework.  I tried to write my first book in third grade, then another one in seventh grade, plus two while I was in high school.  I spent years poring over different writing magazines and journals, pulling out every tip and hint and suggestion I could, and then trying all of them out (even the contradictory ones).  I took writing classes in high school and college.  I joined writing groups.  I made two attempts at the college novel, then the after-college novel, and then the “moved to California” novel.  I’m going to go out on a limb and say I probably submitted more manuscripts with paper and postage than at least half of you have done through the miracle space-age technology of email.
And it all led somewhere.  I received personal rejection letters from editors at magazines and comic books encouraging me to try again.  One of my college writing professors, the multi-award winning novelist John Edgar Wideman, told me with absolute certainty that I was going to make it as a writer.  The first script I wrote got me a meeting with Ron Moore (of Deep Space Nine and later Battlestar Galactica).  Agents asked to look at my manuscripts. 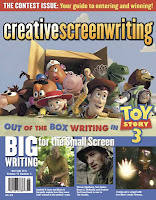 More to the point, people eventually started to pay me for my writing.  It’s not the only yardstick for success, granted, but I think we can all agree it’s the one that’s universally accepted and pretty much always has been.  My ability to write got me a job as an entertainment journalist.  I sold short stories to journals and anthologies.  I’ve sold half a dozen books to Permuted Press, and later to Crown Publishing, a division of Random House—and some of those books have sold very, very well and received a lot of praise (okay, so there’s a little self-promotion).  Amazon Studios hired me to develop a screenplay idea for them and write up a treatment.  For the past six years, I’ve supported myself by stringing words together in a way that pleased people enough that they paid me to keep doing it.
So... that’s what I’m bringing to the table.
If you’re interested, stick around.  Next time I want to talk a bit about the BFG-9000 plasma rifle in the forty-watt range and other firearms.
Until then... go write.