You godless heathens.
So, one thing I’ve heard from a fair number of writing gurus—both for books and screenwriting—is to never, ever use flashbacks.  Which seems a bit odd, because there are plenty of well-known novels and films that use them.  Yet folks keep saying it again and again. Don’t use flashbacks.  Don’t use flashbacks.
The thing is, it’s actually quite easy to do great, fully functional flashbacks.  The kind that make your readers get a thrill rather than leave them scratching their heads.  It takes a basic understanding of story structure and a bit of thought, but that’s it.  They’re something I wanted to go over in that big structure series I keep promising to revisit, but... well, we’re all here now.
So... flashbacks.
And this is kind of big and sprawling, so I apologize now.  But it makes up for missing last week.
For our purposes, the term flashback can cover a lot of things.  It can be an element within the story like a recalled memory, dream sequence, letter or journal entry.  Sometimes, like in my own Ex-Heroes series, it’s just part of the way the narrative has been structured.  Whatever the flashback is, however, it’s going to need to follow certain rules in order to work.
When someone says a flashback doesn’t work, it’s almost always because it inherently has one of four major flaws (I say “almost” because there’s always some bold, daring folks who will find very unique ways to make something not work).  And it’s interesting to note that these four common flaws also pretty much define a successful flashback.  Once I understand the flaws, I’ll understand how to do fantastic flashbacks.
So, first big helpful hint.  I cannot start a story with a flashback.  Never.  This is the first of those four flaws, and it’s a simple logic/labeling problem so it’s pretty easy to deal with.
Why is starting with a flashback illogical?  By its very nature, a flashback implies we’re going to a point in time that’s before now.  This means we need a now before we can flash back to anything else. 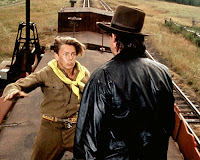 Indiana Jones and the Last Crusade does not begin with a flashback.  It begins in the “present” of 1912, when Indy’s just a teenage kid trying to stop a group of treasure hunters.  Again, this isn’t a flashback, it’s just a different setting.  The story then moves forward thirty years to a new setting where Indy is an adult and reclaiming that same bit of treasure for his museum.
Calling this sort of thing a flashback (especially in a screenplay) is just going to get my story labeled on page one as something by a  rookie who doesn’t understand basic structure.  Personally, that’s not a first impression I want to make.
All clear?
Okay, moving on...
Now, I can use a flashback anywhere in my narrative (except at the very start, as I just said), but this switch in the linear structure can’t affect the dramatic structure.  If I’m going to drop linear point D between R and S in my narrative, it has to keep the story moving forward.  D has to keep advancing the plot.  It also needs to keep building tension.  If it doesn’t, there was no point to this flashback.
A lot of writers use flashbacks as infodumps.  The flashbacks are seen as a chance to show how Wakko met Phoebe, how Phoebe became a ninja, why Wakko hates snakes, and so on.  The mistaken belief is that if I do this in a flashback, I’m not affecting the structure of the present storyline because these events aren’t happening now—they’re happening in the past.
When I do this, I’m confusing linear structure with narrative structure.  This is the second major mistake.  As I mentioned above—and have mentioned before—the narrative needs to keep moving forward.  Just like a shark, if the story I’m writing (or reading) stops moving forward, it dies.
So when I have a flashback, it has to keep moving the story forward.  It has to tell me something new and relevant.  It doesn’t matter where the events fall in the linear structure of the story, but wherever I’m using them they have to fit into the dramatic structure.
For example...  here’s a flashback failure from a book I read last year.  Some names and situations have been changed to protect those I wanted to pummel senseless a third of the way into the book...
A man’s family dies when they eat tainted meat (he’s off banging his mistress, so he survives—no guilt there).  The narrative then flashes back a few months and spends three chapters in the boardroom of the meat-packing company’s parent corporation.  They’ve just found out the meat is tainted.  Should they shut down the plant?  Announce the problem?  Should they do a recall?  Realistically, how much would they spend on lawsuits?  Maybe it’s better just to let it go and roll the dice.
So the plot was put on hold for three chapters (three long, full chapters) so we could see the board reach a decision we already knew they made—to let the meat be sold.  One could make the argument that we find out their exact motivation in these chapters.  Thing is, their motivation is exactly what most of us would expect from a bunch of corporate executives.  In this tainted meat scenario, what’s the most likely reason the executives would decide not to issue a recall?  Money, of course.
This flashback served no purpose at all.  It gave us a resolution we already knew, with a motivation nine out of ten people automatically assumed.  It did nothing except bring the narrative to a dead halt.  There’s a good argument to be made that it actually made the narrative go backwards.
Now, the reverse of this problem is also an issue.  It’s the third one, as a matter of fact.  This is when the writer confuses the narrative story with the linear story.  This is very similar to a problem I’ve mentioned before, being clear on the first time something happens in a story.  When this problem arises with flashbacks, instead of destroying all possible tension, as mentioned above, it destroys logic.
Let’s say I’m telling a murder mystery.  On page 75 of my story, the lead character has no idea who the murderer is.  Then, on page 125, I flash back two weeks to something that happened “off camera” earlier.  Here I reveal that my heroine learned the identity of the killer because of a clue she spotted near the mellonballer.
In a rough, quick way, this makes sense.  On page 75 she doesn’t know.  On page 125 she does.  Except once I put these story elements in linear order... well, now they don’t make any sense.  While it makes sense that this is a new bit of information for the reader on page 125, it’s not new to my heroine.  She’s known all along.  Which makes her actions and dialogue for the last hundred pages complete nonsense.

A quick story.  One I’ve told before...
I worked on the really, really bad sequel to a fairly clever murder mystery film, one which was far more famous for Denise Richards making out with Neve Campbell in a pool then it was for its cleverness.  At the end of the original film, there are a series of flashbacks that show how the various characters were intertwined and involved, and also how the various twists were pulled off.  The film I worked on had these flashbacks at the end, too, but with one major difference...
When you put these flashbacks in place within the linear story, they didn’t make a bit of sense.  Either they added absolutely nothing to the story or else suddenly people had conflicting motivations, plot points became bizarre twists, and once-clear twists became muddled nonsense.  The writers were simply seeing this as “new information” and not considering that, within the linear structure, it was all actually old information that needed to match up with the rest of the film.
One of the best ways to test this is to take a narrative apart and put it back together in linear order.  Are motivations still clear?  Do plot twists still make sense?  That’s a good sign the flashback is solid.
At least, solid in this respect.
There’s one last way flashbacks tend to frustrate readers.  The fourth way.  By the very nature of a flashback being out of sequence, the readers or audience have effectively seen the future.  If my character is alive at story point S, flashing back to show her in a life threatening situation at D doesn’t really accomplish anything.
For example...
Let’s say I’m writing a story where Yakko and Dot are writing up their mission reports at Monster Slayer HQ after killing the Great Vampire.  And then they remember that they still owe a report on the mummy outbreak in Cairo.  So they start scribbling their report and I write a big dramatic flashback scene that ends the chapter with the two of them backed against a wall, outnumbered and surrounded by a dozen mummies and the avatar of a very pissed-off Egyptian god.
Thing is... there really isn’t any tension in this cliffhanger, is there?  Because the moment the reader pauses, even for an instant (like, say, at this chapter break), they’ll remember Yakko and Dot are sitting back at HQ writing up this report.  Alive and well.  No missing limbs or sensory organs.  Not even any notable scars.  Heck, we know they’ve gone on another mission since this one (killing the Great Vampire) and survived that one, too.  So in this case, the flashback actually hurts the story because it’s sucking all the tension out and killing forward momentum.
While it wasn’t really a flashback (because, again, it wasn’t flashing back from anything), this was one of the huge flaws with the Star Wars prequels.  By peppering the story with characters whose future we already knew, Lucas effectively tied his own hands and sabotaged any attempt at tension.  He could threaten young Obi Wan Kenobi with all sorts of things, but at the end of the day we all know he survives to become old Ben Kenobi.  And old Ben had all his major limbs, all his fingers, both eyes...  He was in great shape.
So, four basic rules.

Now, I’m going to suggest a movie to demonstrate a fantastic series of flashbacks, and you may laugh a bit. Resident Evil.  Yep, it’s corny fun and the series has degenerated into near-nonsense that just showcases Milla Jovovich’s figure, but—credit where credit is due—the first film has a fairly tight story and uses flashbacks very, very well.  There are three major flashbacks (each one a slightly more detailed account of a past event as Alice’s memories come back), and they’re a perfect fit for those four rules I just mentioned. Go grab it from Netflix and check it out.
Next time, I’d like to talk to you about some events from last week...
No, wait... next time I wanted to talk about good genre stories.
Until then, go write.