Is there nothing they couldn’t do...?
Back when I was in college, I submitted a story to a magazine.  It was loosely based on the myth of the Wandering Jew, and I’d had a character passing through time at a couple key events in history.  I later incorporated it into my college novel, The Trinity, which none of you have ever read.  For good reason.
The story was rejected.  Not really a surprise, in retrospect, but the editor did send back a personalized response.  He congratulated me on my language, my characters, my dialogue, and my descriptions.  “However,” he said (paraphrasing a bit), “there isn’t much of a story here.  It’s a really neat magical mystery tour, but that’s it.”
That term threw me a bit at first.  Wasn’t much of a story?  I’d written about an immortal passing down through the ages.  He was there for the Crucifixion.  The fall of Rome.  Magellan’s voyage around the world.  The Boston Tea Party.  How could this editor say there wasn’t a story?  Well, college-age me grumbled a bit and moved on, but I eventually figured out what that editor was talking about.
Let me give you a few quick examples...
(and these are just titles to get the point across—don’t read too much into them)
Sometimes the tour might be the Non-Stop Laughs Roadshow.  We’ve all read these stories or seen these films, where every single line pushes for another laugh.  There’s never a pause to breathe, not even a moment.  Sight gags, puns, fart jokes, awkward pauses, absurd segues, funny voices.  Characters, plot, tone—nothing matters but getting the next laugh.
Another version could be Merlin’s Wondrous Mobile Fae Emporium.  Every page has something else magical or supernatural to remind us what a magical and supernatural world this is.  I introduce the reader to ancient gods, spirits, supernatural creatures, and arcane mailmen.  Magical weapons, armor, jewelry, and household utensils.  Everything is magical.  Everything is from the dawn of recorded history. Except maybe the bathmat.
No, sorry, the bathmat was woven on the loom of Fate with the silk of astral spiders.  But the washcloth is pretty mundane. 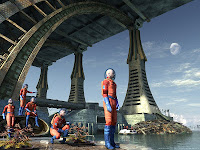 The High-Tech Pan-Galactic Tour is sci-fi for the sake of sci-fi.  Because in the future or alien world that I’ve created, everything is different.  People wear clothes for different reasons.  They have robots that aren’t really robots.  Things are powered in an entirely different way.  Transportation, food, the internet, entertainment... it’s all very alien and unrelatable.  Don’t even ask about sex.  In the future it’s so different you wouldn’t’ believe it.
We could also call the tour, say, Captain Spaulding’s Traveling Horror Show.  It’s when people die one after another in horrible ways, usually after witnessing the gruesome death of the last poor bastard.  There’s blood and gore and some really nauseating dietary choices and a few nightmarish torture scenes.  Running someone feet-first through a meat grinder is tame compared to what happens in the horror show.
In my case, it was the Historical Talent Show and Social Mixer.  If my story is set in the 1960s, my character will run into every single person you’ve ever heard of from that decade.  Fidel Castro, Andy Warhol, the Apollo 11 crew, the cast of Star Trek, Ed Sullivan, Harper Lee, Kurt Vonnegut, Kennedy, Nixon, Hendrix, Elvis, and (of course) the Beatles.  Most of them won’t do anything, but they’ll pass through and offer a few words here and there.  Maybe one of them will offer a helpful tip, but odds are they’re just there to get recognized.
Y’see, Timmy, the mistake I made—one I still see lots of people make—is the assumption that a pile of plot points is the same thing as a story.  This is kind of like saying a pile of lumber is the same thing as a house, or there's no difference between a palette of oil paints and the Mona Lisa.
A lot of the time these stories will end up with a very episodic feel to them.  In the case of comedies, it’ll be a constant stream of setup-joke-setup-joke-setup-joke.  In horror stories, it’s victim-death-victim-death-victim-death.  The magical mystery tour almost always feels episodic because I’m using it to show you one thing after another with very little connection between them.  Oh, look, it’s the Crucifixion.  Oh, look, it’s Magellan.  Oh, look, it’s Paul Revere.
All of these things I’ve listed above are great elements, no question about it.  If they’re not doing anything to advance the plot or the story, though, they’re just distractions.  There’s a point that this kind of thing is rich detail and there’s a point that it’s just padding.  And that’s the kind of detail that just slows down my story.
Assuming I’ve even got a story.
Any time you feel the need to drop a detail like this into your manuscript, stop for a minute and think.  This may absolutely be the greatest take on werewolves anyone’s ever put on paper, but if the werewolf’s only in the story to show this take... maybe I should save it for something else.  I may have scribbled the most elaborate death scene ever, but if absolutely nothing changes in the story when I swap out those six pages with “And then Phoebe killed Wakko,” maybe I should reconsider those six pages.
And if I can just pull them out altogether without changing the story...  Well, I’ve got to wonder what they were doing there in the first place.
Next time, I want to talk about your but for a little bit.  Especially yours.
Yours... not quite so much.
Until then, go write.