First off, my apologies for running late. Lots of work on the new book.

Second off, a bit of shameful self-promotion. If you haven’t picked up my “debut novel” Ex-Heroes, the publisher’s put the ebook version on a fantastic sale right now. $2.99 for the next week (starting today). Kindle, Nook, Kobo, whatever. If you haven’t grabbed it, now’s a great chance. If you’ve been pushing a friend to get it, tell them about it now. Or just buy it for them. After all, the sequel’s out in about four weeks.

And now, with that ugly bit of capitalism out of the way...

If you’re a big fan of Doctor Who (like me), you know the sonic screwdriver is about the most useful tool ever invented. It opens and closes locks, takes readings, repairs barbed wire, gives phones universal roaming, acts as a TARDIS remote control, and hundreds of other things. Put simply, it’s the greatest all-in-one tool that has ever existed.

Alas, most of us just have to buy a whole tool box

Let’s say your significant other comes home from the market and says “Hey, the flux capacitor on the car isn’t fluxxing. You might want to check it out.”

You get the housing open on the flux capacitor and it looks like the problem’s really in the plutonium intake. So, you head back to the kitchen, grab a pair of pliers, and go back out to the garage. Alas, that feeder tube is on a little too tight so you’re really going to need a crescent wrench for this one. Walk to your apartment again, grab a crescent wrench, one more time to the garage and start to—dammit, that intake valve is just too big for a 5/8” wrench. You’re going to need the full 1” to take it off. Back inside to the kitchen... 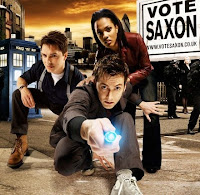 I’m sure you can all see what’s going wrong here. It’s not that we’re trying to fix the plutonium intake when the problem’s clearly in the flux dispersal array. The problem is that we’re attacking this project piecemeal, trying to solve it a single element at a time, and in doing so things are dragging out far longer than they need to. Unless you’ve actually got a sonic screwdriver, you can’t grab one tool out of your toolbox and go see what the problem is. You also don’t go check the problem, walk back, and grab the next item you need at this particular stage.

No, you take the whole toolbox. You bring everything. Because it’s worth the little extra effort to have it all handy and there to work with if you need it. Yeah, you’re not going to use every single tool you brought out there, but the amount of time you save is worth that initial extra effort.

For the record, my friend Laura got me a sonic screwdriver for my birthday.

But that’s not important right now.

How many of you have figured out the point of this little scenario...?

A lot of people take forever when they write. Years and years. Sometimes it’s basic procrastination, yes, but sometimes it’s just that they’re trying to get every single element right

Now, there’s nothing wrong with wanting to get things right. That’s the whole point of feedback and editing and doing multiple drafts. Thing is, you can’t do a second draft

When I sat down with my new project, -14-, I spewed out pages and pages of stuff over three months, and soooooooo much of it got cut in later drafts. A lot of it got reworded and some of it got completely rewritten. But I was able to keep working because I had stuff to work with.

Y’see, Timmy, it’s always better to have something to work with than to have nothing to work with. Don’t be scared to put everything in your first draft. Bring it all. Don’t hold back because you think you might not need something or it might not work. Write bits you know you’re going to cut and characters you know are going to be trimmed out. Because you can’t edit or rewrite a paragraph that doesn’t exist.

Next week, unless I get a really cool request or suggestion, a little free verse love poem about the Oxford English Dictionary.

Email ThisBlogThis!Share to TwitterShare to FacebookShare to Pinterest
Labels: 14, drafts, editing, Who