Hey, guess what I wanted to ramble on about this week?

No, not the new Ex-Patriots button the sidebar... (how's that for subtle?)

Villains! The bad guy (or gal). That character with the evil scheme that is pure genius in its simplicity.

First off, I want to make sure we’re all clear on something. There’s a difference between a villain and an antagonist (scary literary terms!).

While your villain is almost always your antagonist, they aren’t always. The first thing that pops to mind is the “lurking in the background” type villain who we know is there, but who never actually does anything. For example, the Emperor is definitely still one of the villains in Star Wars (the first movie had no subtitle, sorry George), but he’s hardly the antagonist. Likewise, it’s actually kind of common to have an antagonist who isn’t a villain. Two examples would be the Fugitive or the oft-maligned Lilo & Stitch. In both of these cases the antagonists are policemen who are 100% on the side of law and order.

I wanted to make that distinction because in this little rant I am going to be talking about villains. Antagonists are easy. In fact, too many people wuss out and have antagonists instead of villains, because creating a good villain is a lot harder than it looks.

Now, I’m going to start by bringing up a touchy subject. I hope everyone here realizes I’m doing it for instructive purposes and not to start any sort of debate. I apologize now if anyone gets offended, but... well, if discussing some of these things morally offends you, a career as a writer might not be for you.

I once read a screenplay about a morally conflicted woman who worked in an abortion clinic. She had very mixed feelings about her job and tried (somewhat) to see both sides of the argument. The screenwriter of this piece was pushing a message, though, and that message was pro-life/anti-abortion.

So... problem. It’s tough to do moral issues on screen in and of themselves. We need to see an actual conflict. An A vs. B situation. Our heroine is on the side of life, and thus is sane and rational and good, so where’s the conflict? What’s she going to struggle against?

That’s right, I said homicidal. As in... maniacs.

Every doctor twirled their mustache and laughed gleefully at the thought of getting to perform an abortion. They had pools going to see who could do the most in one day. When the main character convinces one patient to leave, the doctor actually snaps his fingers and says, “Ah, well... maybe next time.” The rest of the staff would blatantly lie to patients and trick them into signing “binding contracts” that forced them to go through with procedures.

Now, a lot of you who read this collection of rants know that I have a habit of being a bit verbose and pushing things. But the sad thing is, right now I’m not. I’m actually understating things a bit. The staff at this medical clinic was a bunch of ridiculously over-the-top caricatures of evil that made the staff at Auschwitz look like canonized saints.

This is a common problem in message scripts. Whether the message is pro-life, pro-environment, pro-religion, or pro-science, the writers often have trouble putting themselves in the other side’s shoes. If a writer zealously believes in any cause, to the point that nothing could sway their beliefs, it’s going to very difficult for them to empathize with anyone who has opposing views. How could you possibly have opposing views, after all? It’s SO CLEAR that I am right!

This is a problem, because empathy, as I’ve mentioned before, is what makes a good writer. You can always spot it when you’re reading a story by someone with little or no empathy for how other people feel and react. Being able to put yourself in different viewpoints is the key to great characters.
And guess what? Villains are characters. If handled correctly, they’re fantastic characters. Mess them up and... well, they’ll probably end up twirling their mustaches and saying, “Muah-ha-hah” a lot. 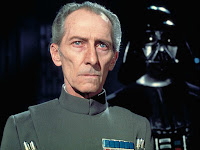 Because they’re characters, that means the bad guys can’t be illogical or fall back on madness as an excuse to explain their behavior. They need to have a real motivation for their actions. The best villains don’t scream and shriek and wave straight razors around. No, the best ones calmly and coldly ransom the life of everyone on your homeworld for a single piece of information.... and then blow up your homeworld anyway. And they do this because—in their minds—they have a perfectly logical reason for doing it. And because they're complete bastards.
Y’see, Timmy, a real villain is a person. You might not agree with them. You might not like them. But you should be able to make sense of why they do what they do.

In the movie Inglorius Basterds, Hans Landa is an absolutely terrifying Nazi officer. He isn’t scary because he shouts or has people killed. What makes him such an effective villain is that he’s completely rational. He makes a calm, solid case for why it makes perfect sense to hate Jews and want to kill them. And then he tops off this little exercise in logic by showing that he’s far smarter than anyone else present (including the audience) and has been guiding the conversation since the moment he entered the room. And that’s when we realize just how evil Landa is.

On the flipside, consider Tank Evans, the over-muscled penguin from the movie Surf’s Up. No, it’s actually fun, you should watch it. One of the problems the writers and actor Diedrich Bader struggled with was trying to make the villainous surfer believable and relatable. Their inspiration came when Bader’s son pointed out that Tank wasn’t the bad guy, he just loved all his trophies. Not only did it cement the character, but it gave them an all new scene (you’ll know it when you see it).

So, here’s my helpful hint for you. If a writer cannot put themselves in the villian’s place at all, don’t try to write them. If it’s completely impossible to empathize with what this character is thinking or to get a grasp on their line of reasoning—and to do it in a way that lets them remain believable—then this character shouldn’t be in the story.

That’s true of any character. So it should true for the villain, too, right?

Next time... y’know, I’m coming off a few intensive drafts and my brain’s a bit fried. Is there anything in particular someone would like addressed? I got a few calls last time I asked. Anything new pop to mind? If not, next week might just be me falling back on something obvious.