I thank all of you who dragged yourselves either out of a triptophan-induced coma to read this right after I posted it or for taking the time to check in while you’re in line for a Black Friday sale.


I’ve talked once before about names for characters and ways to come up with them and how much meaning needs (or doesn’t need) to be given to them. I thought it would be a good time to revisit that train of thought, especially since I’ve had two books come out since then. One of which has become unexpectedly popular.

If you've listened to or read any of the different interviews I’ve done over the past year, you know a lot of the characters in Ex-Heroes first came to be back during my grade school years. At the time, my big goal in life was to make comic books, even though I didn’t know the art and the story were done by two different people. I made up tons and tons of characters when I was supposed to be diagramming sentences, and I’d sketch them out in one of the art notebooks my mom would get me. In all fairness, about 70% of them were either crap or completely derivative of existing Marvel or DC characters.

A few had solid ideas behind them, though. So here's how some of their names developed (or just fell) on the page. And because I'm not above self-depricating humor, here are some of the sketches of the characters that eventually, well, grew up into the ones in the book.

By the way, a little warning right up front-- all the images you’re about to see are close to twenty-five years old. They were so faint I had to use my camera because the scanner couldn’t pick up the images. The artwork is not spectacular. Neither is the sense of proportions. The sense of light and shadow is non-existent. God forgive me, much of it is influenced by mid-late ‘80s fashion.

All that being said, unnecessary cruelty will not be tolerated and shall be stomped out post-haste.

St. George got his name a bit circularly. I knew early on I was going to be using a lot of the old characters I’d made up in middle school and junior high, and one of these was the Dragon (originally created as a fresh teenage recruit for Marvel’s New Mutants). I also knew I wanted the post-apocalyptic heroes and civilians to be on a more casual, even level with each other. I figured it wouldn’t be uncommon for many of the heroes to have given up their secret identities. The catch here was that I still felt the Mighty Dragon, as my ‘alpha’ hero, would be a person of great respect in the community.

As it happens, I’ve loved the story of St. George and the Dragon since I was a kid, and this solved a number of issues in one fell swoop. It also didn’t take long to go from there to making his real name George Bailey, just like the lovable martyr Jimmy Stewart played in It’s A Wonderful Life. This helped give St. George a bit more of a “Superman” feel to him (the phenomenally powerful hero with the goofy, clumsy secret identity) and humanized him as a guy trying to deal with the very-recognizable name his parents hung on him. It also immediately tied him to a figure with a solid moral code and strong ethics. 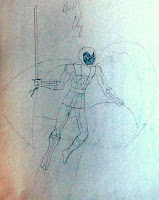 Here’s a fun fact. Stealth was originally a man. He was one of my oldest characters, originally called Night Stalker, first made up in Mr. Berenson’s fifth grade class at York Middle School. That’s kind of an overused name, though, so I played around and came up with Stealth, which is kind of self-explanatory.  At the same time, I was noticing the rarity of female characters in my early oeuvre, and I liked the idea of a woman as the uber badass of the Mount.

I didn’t want to give Stealth’s real name for a few reasons. Her backstory was actually the second one I wrote for the novel, and as I polished it over four or five more drafts it became apparent she was the most obsessed and driven of all of them. She holds herself to such an impossibly high standard and feels like she has to prove something. Considering how she decided to become a hero, it made no sense for her to give up her secret identity, despite the conditions they were all living under. This also firmed up her character even more, because what kind of woman refuses to remove her mask when there’s such a small number of people left in the world? 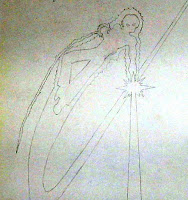 Zzzap is, by far, the most powerful being in the story, and it’s only his own personal limitations which hold him back. He gets queasy and his mental reactions are a lot slower than what he’s physically capable of doing. I wanted a very plain, average name. Dare I say it, a Joe Six-Pack name.
I also admit I wanted to evoke the sense of a classic comic book secret identity with at least one of my characters. So many of those heroes have alliterative names. Peter Parker. Wally West. Reed Richards. Susan Storm. Bruce Banner. Matt Murdock. Stephen Strange. Heck, people have written essays on Superman’s LL fixation with his supporting cast. So Zzzap became Barry Burke.

For the record, the actual name Zzzap, with three Z’s, was inspired by an old Hulk villain called Zzzax. I read somewhere that writer Steve Englehart wanted someone who’d always come last in any alphabetical listing. So I followed in his footsteps with Zzzap. 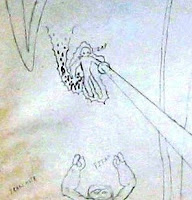 Actually, one more fun fact. I was digging through the old sketchbooks for pictures to go with this post and came across this one here with the very tiny picture of “Zap” amidst a swarm of heroes. I seem to remember this as a very early experiment in starting a picture with stick-figures (which I think I learned from Draw Comics The Marvel Way or some such book). If the date on the cover of the sketchbook is to be believed, it means this is probably one of the oldest pictures of any of these heroes, from 1982. So Zzzap predates Return of the Jedi.

When I first came up with the idea for Gorgon, I freely admit it was a prepubescent idea for a character who could touch Rogue from the X-Men without getting zapped. I made him an energy-vampire off the rationale that similar powers would cancel each other out, and once it was optic-based (he hid his eyes behind sunglasses) Gorgon seemed like a pretty straightforward name to use. His vague backstory was created just for the novel, as was the idea of his custom, camera-iris goggles.

For the record, this was long before most people pictured Rogue as Anna Paquin, and even longer before Anna Paquin was getting in on with vampires on a regular basis. That was all just a bit of serendipity.
His real name of Nikolai Bartamian came from a desire to show off a bit of LA’s melting pot. There’s just a ton of different populations here. Mexican. Korean. Armenian. Chinese. Japanese. I didn’t want it to feel like a pile of male white Anglo-Saxon heroes. And Bartamian is the last name of a friend of mine.

In my original collection of sketches and index cards, Cerberus wasn’t so much a suit of armor as a technological weapons array you wore with regular clothes (kind of like Whiplash in Iron Man 2). It even had a cape and flared gloves. The name came from its ability to throw three types of energy beams. And he was a villain (yep, another he-becomes-she), or at least such a dark, zero-tolerance anti-hero/ mercenary-for-hire that he served as a villain in all respects.

For Ex-Heroes, since Cerberus is this huge, powerful, armored machine, the person inside had to be contrasted as much as possible to stand out. Danielle is a great name which even looks feminine on the page. I also liked the idea of a woman who wants to be feminine, for the guys to look at her, but really has no idea how to make that happen. And it doesn’t help that she’s usually wearing this monstrous battlesuit and has a code-name which makes people mistake her for a man. Morris, in all honesty, I just picked out of the air because it sounded good with Danielle. 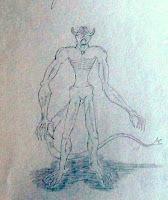 Cairax Murrain was always a monster, always a villain. Originally he was a cape-and-robed sorcerer (named John Carracks) who turned into the demon through a big long ritual (and a sticky, Alien-esque cocoon). The name Cairax was just a bunch of hard syllables, meant to sound a bit alien. Murrain is an archaic word for plague (anyone who’s sat through a full Seder probably knew that already). Together it’s a pretty good name for a demon. The two part name also hints at a certain level of self-awareness and intelligence, because I wanted it clear that the demon itself wasn’t just some slavering beast. Being a little older, I liked the idea of evil slaved to good through this magical “partnership” and then effectively becoming a villain again because of the ex-virus.

His real name of Maxwell Hale came from two places, so to speak. Max ties back to Cariax, sound-wise, and let me hint the demon isn’t entirely responsible for Max coming across as a bit ruthless and self-centered, no matter how noble his motives were. On the flipside, Hale is a very simple name. It may not be common but it sounds common, which helped ground the guy who was supposed to be this amazing sorcerer and make him a bit more relatable.

And that, I think, covers most of the bases for now. I could go into Regenerator, Midknight, Blockbuster, and dear little Banzai, but this is kind of long already and most of the points I wanted to make have been covered.

Next time, I’ll probably go on for a dozen or two paragraphs about something else.

Until then, have a Happy Thanksgiving. And try to do some writing after the pecan pie.