We Are The Dharma Initiative

If you know the show, you get the joke. And the topic of this week’s rant.

Last week I used a certain soon-to-be-ended island castaways show to demonstrate how you can construct a solid mystery, and also some of the common places mysteries go wrong. This week I’d like to look at mystery’s kissing cousin, the twist. 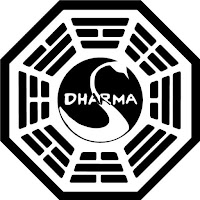 When we discover that Oceanic 815 crashed because of Desmond and the Hatch computer which controls magnetic energy, that’s a twist. Realizing that we’re not watching drunken Jack Shepard in a flashback but in a flash-forward is also a twist. When we learn that John Locke never came back from the dead, he’s been the Smoke Monster all along (or the Man in Black, if you prefer), that’s a great twist. The story--and our own expectations--have been leading us to believe one thing, and it turns out the truth is something else. The key thing to remember is that when a twist is revealed, it should change how we interpret events that have happened in the story so far.

For the record, the twist is probably tied with the mystery as one of the top things fledgling writers try to do and fail. How do they mess this up? Allow me to tell you a little story...

A few years before the ranty blog came into existence, I had the misfortune of working on a really bad, straight-to-DVD sequel to a fairly popular film. The original had a tight, clever mystery story with multiple twists and double crosses. Oddly enough, though, it was far better known for numerous sequences with Denise Richards soaking wet and at various levels of nudity. Go figure.

The sequel I worked on had some of those twists and double crosses, but they weren't very tight. In fact, when you actually broke down the story... most of them were complete nonsense. The writers had just thrown in tons of "reveals" without seeing if any of them made linear sense. Some of the facts revealed in the course of the story were either already known or could’ve easily been deduced without too much trouble. It was kind of like the big reveal that I have a blog! Yeah, I’ve never said it in so many words, but there it is. Or perhaps you'd be stunned to discover the blog has Amazon links on it!

Yup, all the skeletons are coming out of the closet now.

The revealed information that sequel script kept tossing out also didn’t have any impact on the story. Which, as I mentioned above, is one of the key elements of a twist. It has to change how we interpret the things we’ve read or seen up until this point. If it doesn’t, it’s just pointless information. The sequel’s reveals just kind of... sat there.

Y’see, Timmy, some writers try to push a reveal as a twist when it has no bearing on the story. Would it change the story of LOST to discover Hurley also loves The Last Starfighter? Or that the Dharma folk used the Smoke Monster to frighten children? Would we look at the past two seasons in a new way if we learned Sayid drank for a week straight after Nadia was killed? Odds are none of you knew any of this, so it is revealed information, but none of these revelations twist any of our perceptions of the events or characters. Which is why the writers never tried to make that type of stuff feel like a big revelation.

I’m just making all that stuff up, by the way. I think Hurley is a Star Wars purist.

Now, there’s one more potential catch to a good twist, but this one has a bit more leeway. A twist depends on a certain amount of story coming before it, because it gains power and impact when there’s more story for it to... well, twist. It’s difficult to manage a successful twist in the first ten pages of a manuscript, but a lot of people try to do it anyway.

The first major twist of LOST was, arguably, the reveal that Locke was in a wheelchair before the crash of flight 815, the same wheelchair we’ve seen other survivors using as a cart to move stuff across the beach. I say arguably because there is one before it, but it kind of feeds into what I was saying about needing a certain amount of storytelling ahead of time. In the two hour pilot, there is the brief mystery of who was in the handcuffs. We know somebody on this flight was a prisoner, but who? The logical assumption is Sawyer, which is why we’re all surprised to discover it was small and sometimes squeamish Kate.

This is a twist, yes, but like the quickly-solved mystery this bit of information is revealed so soon it’s almost a regular plot point. Discovering Kate was the federal prisoner forces us to rethink 50 or 60 pages of storytelling, but learning that Locke was in a wheelchair makes us look at almost 200 pages in a new light. It not only forces us to re-evaluate the John Locke we’ve seen up until now, but also the island and the plane crash itself. When it's revealed that the Smoke Monster is a sentient, thinking creature at odds with Jacob and the Others, that requires us to re-examine all five seasons of the show so far.

Next week, I’d like to focus past all the background noise and talk about another common mistake with overwriting.