Not to be confused with the uncanny valley, which is another phenomenon altogether...

So, there’s a show on television called LOST. Maybe you’ve heard of it? It’s not terribly popular and has only survived because of a miniscule-yet-devout fan following. Oh, and it completely changed how people approach one hour dramas on television and proved a genre show can hold its own.

Proving something, of course, doesn’t mean anyone’s learned anything. The recent Wall Street collapse has pretty much flat out proven trickle-down economics doesn’t work, but people still rally behind that mentality.

By the way, I’m going to be tossing out some spoiler-esque stuff here. If you’ve never seen the show and have been planning a one-month Netflix marathon once it’s over, you may want to skip today’s little rant. Maybe next week’s, too. A good part of storytelling is getting the twists and reveals when you’re supposed to, so if you want to enjoy this show as it was intended, take the week off.

Because of the phenomenal success of LOST, numerous shows tried to mimic its formula and failed. I’ve seen dozens and dozen of fledgling writers try to mimic it and they’ve failed, too. And, interestingly enough, they’re all failing for the same reasons. They don’t understand what they’re doing.

That sounds a little flip, I know, but that’s what it comes down to. These folks tried to copy something they saw, but they didn’t actually understand what they were seeing. In one sense, open-heart surgery is cutting open someone’s chest and poking around with steel tools, but we all understand that there’s a lot more to it than that. This is why nobody reading this grab for a steak knife when Uncle Wakko complains of chest pains.

At its core, this failure of storytelling comes from not understanding the difference between a mystery and a twist and how they both succeed. They’re two very different things, they each work a specific way, and they’re not interchangeable. Let’s slap a simple definition on each one. 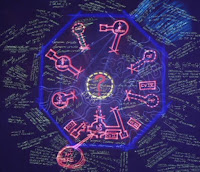 A mystery is when the main character(s) and the audience are aware that a piece of information has been hidden or kept from them, and the story usually involves the search for that unknown fact (or facts, as it may be). How did a polar bear end up on this tropical island? Why do these six numbers keep appearing everywhere? Who built this gigantic statue on the shore, and how did it get smashed? At it’s simplest, a mystery is a question someone in your story is asking and trying to find the answer to.

Now, here’s how people tend to screw this up.

In a mystery, the key element you have to remember is that the characters are aware of it. They’re searching for answers, or at least they’d be somewhat interested to find those answers. Because of this, the strength of a mystery is entirely dependent on those characters. If we (the readers or viewers) don’t care about the characters, we don’t care if they reach their goals, and in this case their goal is solving the mystery. In the same way a good character can make you empathize with a broken heart or an amazing triumph, they’ll make you want to know what the answers is behind a given puzzle.

Using LOST as an example again, think of the first three or four episodes. The first episode (or first half of the two-hour pilot) is nothing but character development. It’s about who survived the crash and giving us a quick thumbnail of their personalities. At the very, very end of the episode, there’s a loud roar and we see something crashing through the trees in the distance. Episode two is more character, and then a bit more mystery. There’s a polar bear in the jungle and the something grabs the pilot out of the crashed plane’s cockpit (a pilot who was supposed to be Frank Lapidus, it’s worth noting...) and brutally kills him. Episode three is even more character and ends with a creepy radio signal left by someone who was shipwrecked on this island almost twenty years ago. It’s not until the fourth episode, “Walkabout,” that there’s undeniably something unnatural going on here.

So out of the first four hours of LOST, all the mystery elements add up to... maybe ten minutes, if you really stretch it. The rest is all character. And as has been said many times before, once we believe in the characters, we have to believe in what happens to the characters.

A lot of people get this backward. That’s the first big mistake. They try to start with the mystery, then later on they develop the characters and make them relatable. For the record, this almost never works. How many failed stories or shows or movies have you seen where the writers tried to front-load some kind of mystery with the hope you’d get interested in the characters as they tried to solve it? Remember, it doesn’t matter how cool or awesome or clever the answer is. We need to be interested in the characters who are going to find that answer.

The other important thing about a mystery is that it has to have a resolution. We love the mystery, we remember the mystery, and we’ll stick around while these characters try to figure it out, but eventually we need to learn why there’s a polar bear on the island and why all that’s left of the statue is one four-toed foot. Mysteries need answers. Even if they aren’t spelled out or blatantly said, the audience needs to believe an answer exists--and has always existed--and they’re not just getting strung along.

That’s another classic mistake some writers make. They try to dazzle their audience with what looks like a cool, baffling mystery. What they’re really doing, though, is just throwing out random elements they’ve seen before. Their puzzle hasn’t been thought out and they’re not starting with an answer. When a mystery has a silly, this-makes-no-sense resolution, it sours everything that came before it (assuming it wasn’t soured already). When a mystery is never resolved (to be continued in the next book or the next screenplay), it gives the audience the sense they’ve wasted their time.

That’s a great note for beginners, by the way--any fledgling writer is going to fail with a mystery that gets revealed “next time.” You don’t get another manuscript to impress editors, publishers, or contest readers with. You just have this one. If you’re someone reading this blog and you don’t have two sales under your belt (not dollar options, not back-end deals--sales), “to be continued” is almost guaranteed to be the kiss of death.

There’s another aspect to the resolution, too. If we find out the answer too soon, this wasn’t a mystery, just a minor plot point. Who burned Michael’s raft is never really a mystery because we almost immediately discover it was his son, Walt, who kind of likes it here on the island. What Jacob’s lighthouse is for also isn’t much of a mystery because we get the answer about fifteen minutes after we first see it. A mystery takes a little time and generally gets answered near the end of your story, which means you story needs to have an end. Many folks have commented on the thumb-twiddling quality the third season of LOST had. This was because the writers didn’t know when their show was going to end and were left unsure how to reveal their clues. Once they were past the beginning, the middle of their story rambled because they didn’t know where (and when) the end was. As I mentioned above, a mystery needs a solid conclusion, and that conclusion can’t be pushed off to some other time.

Speaking of pushing things off until another time, this is getting a bit long and I’m going to wrap it up. Next week I’ll use our favorite island castaways to rant about twists and some of the common mistakes people make with them.