Running a little late this week. I blame it on my landlord, who insists I have rent money every month. He’s very capitalist that way.


Anyway, pop culture reference in the title, but only the old people will get it..

Speaking of getting it, want to hear the absolute silliest thing I ever read online? It's not a dirty joke or anything like that. This was in a defiant post someone made on a movie-predictions board I used to visit on a regular basis. Essentially, this one misogynist gent-- who took great pains to tell everyone (frequently) that he was a writer-- was explaining why he'd never read one of several classic books that were getting the adaptation treatment that season. I think one of them may have been the second Narnia book. There was another one, too, but I can't remember what it was.

Anyway--the reason he'd never read any of them?

No, seriously. That's what he said. With the capitals and the italics. I can’t really blame it on him, though. I keep seeing or hearing variations on this once a month or so. Just heard it recently at a housewarming party.

Now, I write full time. Eight hours a day or more, five or six days a week. It is how I make my living. So far this year I’ve already done a dozen articles for the magazine and another half dozen or so for the weekly newsletter. Plus I’m poking at a short story for an anthology, a sequel for Ex-Heroes (shameless plug--order your copy over there on the right), and scribbling notes for another book idea that’s been poking at me. Jabbing, really.

Keeping all that in mind... I’ve already read well over a dozen books this year. 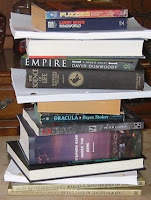 We’re barely into April and I've already read sixteen books--more than one a week. I’ve read classic novels like Dracula and shiny-new ones like Under The Dome. I read The Terror by Dan Simmons and then followed it up with an actual history of the Franklin expedition. I’ve read books on ancient Egyptian history and early 20th century spiritualism. I’ve read an end-of-the-world story by Dave Dunwoody that was really fun and another one by Dean Koontz that really wasn’t.

Plus I have to read a lot for work. Screenplays for Alice in Wonderland, Nightmare on Elm Street, Season of the Witch, and several other films. Heck, I read a couple scripts for films I’m not even covering.

I love reading. There’s nothing like getting caught up in a great storytelling experience. It’s like eating a good meal. It relaxes me and gets my mind spinning.

Y’see, Timmy, you can’t make something out of nothing. A physicist needs to study what’s been done in order to develop new theories. A film director has to study the work of previous directors. Writers need to read.

Look at it this way. Bodybuilders need to take in protein to create new muscle. If they continue to do all those strenuous exercises without taking anything in, it actually becomes more detrimental than beneficial. They burn up calories, their muscles wither, and very quickly it starts to affect their performance. Suddenly they can’t lift as much or go for as long. In the end, not taking in material will ruin their chances of being a successful bodybuilder.

In a like manner, a smart bodybuilder knows what to take in. They know eating nothing but steak is just as bad as eating nothing but Twinkies. There are times to eat steamed broccoli and lean turkey breast, but there are also times you need a cheeseburger. No, seriously. I used to train with a professional weightlifter and bodybuilder who made a point of eating a huge fast-food cheeseburger after every competition. In the days before he’d work his body fat down to dangerous levels, but once the competition was over it was important to replenish those levels as quickly as possible to stay healthy. He knew there was a time he had to eat fatty junk food in order to be a success.

So when you read, read everything you can. Don’t just limit yourself to your chosen genre or format. Break up all that horror with some satire or sci-fi. If you’re writing romantic comedy scripts, pause to check out a drama or two, and vice-versa. And don’t forget to mix a little bit of not-so-fantastic stuff in there, too.

It’s also worth mentioning that while the classics are great, make sure you’re staying current. Dickens is fantastic, but make sure you’ve got a vague idea what Dan Brown and Stephen King are doing. Casablanca and Chinatown are fantastic scripts, but the first draft of Wanted was a heckuva lot better than the movie and that’s what sold it. No one’s saying the classics aren’t good, but if you’re reading the ranty blog I’m guessing you want to sell something in the near future, not a few decades in the past.

Next week, how a lantern can let you get away with almost anything. Honest. You’re going to love it. Plus I’m going to get to name-drop a lot, and that’s always fun.

Until then go write. And read a bit, too.