No, this isn't something like the Dirty Dozen, the Rogues Gallery, or the Crazy Eights. I'm not being that subtle for once.

So, I've tossed around an idea once or thrice here called "common knowledge." It's the sort of stuff you can put in your writing without worrying that people won't know what you're talking about. Nazis are bad. Puppies are good. Republicans are conservative. Democrats are progressive. Grass is green. The sky is blue. Getting into Harvard, the Major Leagues, or the Navy SEALS is an accomplishment. These are all safe bets in the world of common knowledge.

The place I see fledgling writers stumble a lot is when they decide since they know something, everyone must know it. They'll even insist people should know it. And then they'll use this "common knowledge" in their writing. Which is why a writer can make a joke about Kit Fisto putting his testicles all over Natalie Portman and then can't figure out why no one laughs hysterically.

For the record, that's a double-whammy nerd joke, but it depends on you knowing who Kit Fisto was in the Star Wars prequels and knowing what he looked like and remembering a joke from the 1985 film Better Off Dead. If you did have all that at your fingertips while you were reading that last paragraph, you probably got a good chuckle. If not, you're still wrinkling your brow and trying to figure out what I'm getting at.

Which is what I wanted to get at.

On The Simpsons they have a special kind of joke they call "the ten percenters." As the name implies, a ten percenter is a gag or a joke they know only ten percent of their audience is going to get. It's a sly reference to politics or Fox News or Planet of the Apes that will slip by a lot of folks and make them wonder why one or two people keep repeating that line later at work.

(By the way, if any of you can explain the reference behind "I'm the first non-Brazilian person to travel in time!!" I'd love to hear it. Seen that one every Halloween for coming on fifteen years, still don't get that joke...)

Now, here's the key point. While they may do three or four of these ten percenters in each episode, The Simpsons does lots and lots of jokes for 99% of their audience. Everybody gets why it's funny when Homer's new boss turns out to be a supervillian planning to wipe out France with his doomsday device, and the irony that this is a job Homer's finally good at. 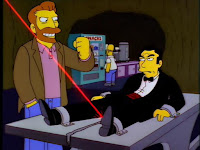 We also understand the joke when Krusty blames his bad behavior on his crippling Percoset addiction, then gets reminded Percoset is one of his show's sponsors. And it's hard not to laugh when Homer cheerfully implicates himself as a suspect when the old lady down the street is murdered. The ten percenters are great, but they can't be the majority of the program. This is when the writers acknowledge that some of the things they find funny might be a bit obscure to some audience members. It also shows they're aware of what the majority of their audience will find funny.

Want a literary example of a ten-percenter? I'm betting a decent number of you here have read Stephen King's Under The Dome by now, yes? How many of you caught the reference to Lee Child's kick-ass military character Jack Reacher? I skimmed right past it, myself, with only a dim thought of Who is this guy he's talking about? flitting through my mind. It wasn't a huge, key element of the chapter, though, so it didn't really disrupt my reading. My girlfriend had to point it out while she was reading it.

Y'see, Timmy, the biggest mistake I can make as a writer is to assume that because I know this, everyone does. Writers are creative folks who read voraciously. We watch the news, we do research. We even watch for details in our own lives. This is especially dangerous for writers coming out of specialized fields where they've got a lot of specialized terms and knowledge. If you're a lawyer, every other lawyer in the office might get your witty reference, but that doesn't mean your mechanic will. Likewise, the mechanic's clever transmission joke might make the junior ad executive scratch her head.

Speaking for myself, I could probably name over three hundred Marvel or DC comic characters on sight, or describe what they look like. I've got a fairly large background in archaeology and astronomy. From my years in the film industry I can rattle off tons of movie jargon that would leave most of you scratching your heads. I've got a higher-than-average knowledge about firearms, and have fired more types than many military weapons experts (the film industry again). I also play a popular miniatures game with tons of backstory, which means I can spew out pages of silly facts about fictional alien life-forms like Tyranids, Kroot, or Necrons.

Yet, I'd never assume everyone else knows this stuff. I sure as hell wouldn't assume you'd understand some of the jokes that have built up between my friends over the years. They make us laugh, but you'd probably stand there with a blank look on your face.

It's also worth noting that the reverse of this is true. If I assume my audience isn't going to know anything I'm talking about, I'm just going to annoy them. If I waste pages explaining that Nazis are bad, people need to breathe oxygen, or that the man who just got his leg torn off might die from blood loss... well, I'm not going to be holding anyone's interest for long

A writer needs to have a firm grasp of what their intended audience knows. It doesn't matter if I think everyone should know the genestealer reproductive cycle-- most people don't. If I do this, I'd be confusing my audience at best, talking down to them at worst. And that's when they put the manuscript down in that big pile on the left.

So now you know. And knowing is half the battle.

Next time, we all need to be punctual. More or less.