If you've never heard that term and are grasping for a pop culture reference... don't bother. I just made it up. The reasons why will soon be as plain as...

As I've said once or thrice before, good dialogue is everything. We learn so much subtle stuff from characters by what they say and how they say it. Does Bob call Cindy his girlfriend or his woman or his old lady? Is she his lover, his ho, his chica, his bitch, his significant other? No matter what their relationship is, the words he uses to describe it tell us something about him.

One term that comes up a lot while reading contest submissions--or writing of any type, really—is on the nose dialogue. I’ve seen it tossed out to beginners numerous times in feedback, but usually without any explanation. It’s the difference between “Why are you always so disrespectful to me in staff meetings, Bob?” and “What the hell’s your problem, anyway?” At its very simplest, what this means is the character (or characters) are saying precisely what they’re thinking with no subtlety to it whatsoever. There's no inference, no implications, no innuendoes or layered meanings. It’s dialogue stating the obvious, and I've mentioned before what a horrible idea it is to state the obvious.

On the nose dialogue usually strips away character, too. When your gangsta drug dealers begin to lament the failed potential of their fallen brethren, they're not speaking like people who grew up on the street. That's the writer poking through and trying to tell us something. 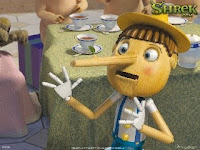 Often it's to spew out some character elements or backstory, and it comes out awkward because it's being forced from the character speaking.

To be clear, there is a difference between on the nose and exposition. While most exposition is on the nose, the reverse is not always true. You can have on the nose dialogue when people talk about their relationship (or someone else's), the Thai food they had last night, or the movie they want to go see tomorrow.

Here's a couple things you should be on the lookout for--these are all either common with on the nose dialogue or sure signs you're avoiding it.

Proper English--I've mentioned before the difference between written English and spoken dialogue. When dialogue follows all the rules of grammar it starts to get wooden and lose a lot of its flavor. Sometimes there's a point to this. One of my own characters in Ex-Heroes, Stealth, is a bit of a grammar Nazi. So is Data on Star Trek (robots and aliens always have great grammar for some reason). For the vast majority of us though, we get a bit loose when we speak. We use contractions and mismatch verbs and numbers. It just happens. When we don't, dialogue becomes rigid, and that's just a short shuffle from being wooden.

Telling what's happening--While it's never good, on the nose dialogue is a killer in scripts, especially when it takes this route. It's when characters describe what they're doing for no real reason. Not when they explain what they're doing (say, defusing a bomb), but when they're just saying their actions aloud. Have you ever heard an old radio-show when the actors had to depend on just dialogue with no visuals at all?

"Easy, Margot. Just let me get this blindfold off you... there we go."

This kind of clumsy dialogue immediately tells the reader that the writer isn’t picturing this scene visually at all. For screenwriters, this kind of thing is almost guaranteed to get your script tossed in the big pile on the left.

Lack of jargon--The idea of slang has been around for a long time. Bram Stoker talked about it in Dracula 120 years ago, and it's a safe bet printers had their own special jargon in the workplace less than a decade after Guttenberg made his printing press. Everyone has their own set of words and terms that gets used within their particular group, and these words spill out into most of their conversations. In other words, lawyers speak like lawyers, mechanics talk like mechanics, and sci-fi geeks with no lives talk like Klingons (or Na'Vi, these days, I guess). When these characters lose these basic subtleties, their dialogue starts getting on the nose.

Lack of flirting--It sounds silly, I know, but it's one to look for. This is a fact of human nature. We show affection for one another. We all flirt with friends and lovers and potential lovers, sometimes even at extremely inopportune times. It's not always serious, it can take many forms, but that little bit of playfulness and innuendo is present in most casual dialogue exchanges. It's impossible to flirt with on the nose dialogue because it requires subtlety and implied meanings. If absolutely no one in your story flirts on any level, there might be something to consider there.

Five easy things to look for in your dialogue. They're not the only ways your words can be on the nose, but they're the most common, by far.

Next week, I'd like to talk to you about... well, you know. Everybody knows, right?