On this particular Thursday, it seemed like talking about voting could be an interesting idea.
One thing I did all the time when I was starting out—well, once I’d become brave enough to show my writing to anyone past my mom—was to get as many opinions as possible.  If I had enough, I’d count them up like votes.  And I would do whatever they said.  If someone—anyone—wanted this line or that element changed, I’d change it.  Or remove it.  Or add in something new.  Anyone else’s thoughts were just as valid as mine.
This happened to me again about thirteen years ago, just before I started doing this full time.  Slightly different direction, though.  Believe it or not, I ghost-wrote an exercise book.  This woman was very smart and savvy about exercise and the specialized niche she wanted to write toward... not so much about writing and publishing. So she hired me to help her out.  Alas, she kept talking about the book with her friends and fellow fitness professionals, showing them half-finished drafts, and taking everyone’s opinion as scientific fact.  So we rewrote the book again.  And again.  And again.  Not drafts, mind you.  Complete, start-from-scratch rewrites.  I think it went through six or seven major revisions before I had to bow out just for time reasons. And she still didn’t have much more than a first draft of her book.
It was frustrating, but I couldn’t really fault her.  Like I said, I used to do it, too.  I think most people do when we’re starting out and looking for assurance.
Really, it makes sense to do it that way. It’s what we’ve all been taught, right?  Democracy in action.  Let people vote on something, go with the majority. 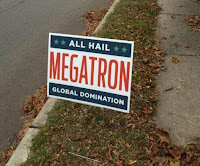 Except...
Writing is not a democracy.  I’m a benevolent dictator at best.  An angry god at worst.
Now, before anyone gets too excited about being a dictator...
I’m not saying I’ll never, ever listen to other opinions.  I have some great beta readers I really trust.  I have a seriously fantastic editor who’s much, much better at spotting flaws than I am.  It doesn’t mean their opinions or suggestions are always right, but I’d be foolish not to at least look at them and consider them.
At the end of the day, though... what my story needs is up to me.  I’m the one crafting and telling it. Every line of dialogue, every subtle character nuance, every beautiful piece of imagery, every clever plot twist.  It all comes from me.  If a dozen people think I need to get rid of the wine bottle scene but I think it’s vital and memorable, I get the last say.
And I need to make that decision.  Opinions are great, but as the dictator the final decision is nobody’s but mine.  If I’m going to put things on hold waiting for a consensus or a clear majority... that just makes me a figurehead.
This also holds for what I’m writing about.  If I just want to write to entertain myself—that’s great.  If I want to fill my story with in-jokes that only ten people on Earth are going to get, that’s also my choice.  I can deliberately focus my book on neo-con, government-hating survivalists or tree-hugging, socialist liberals—and absolutely nobody can say I’m wrong!  This is my story.  Mine.
However...
This doesn’t mean anyone will want to read my story.  Or buy it.  Just because I’m staying true to myself and my vision--only bending where I feel I absolutely must—doesn’t mean my story is going to appeal to anyone else.  And some of those people it may not appeal to are editors.  Under other circumstances, they might be interested and willing to work with me, but if I’m not going to bend at all on that wine bottle scene...  Well, it’s not going to be their fault I didn’t make a sale. 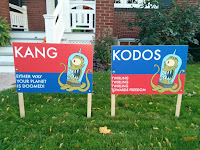 Plus... Let’s face it, I’m not going to please everyone, no matter what choice I make.  I’ve mentioned before that every story has a limited audience.   Sometimes a very limited one.  That’s the problem with leading—even as a benevolent dictator—the best you can ever hope for is a “greater good” situation.  There will always be people with no interest in the topic or genre, readers who just don’t like it.  Hop over to Amazon and check out well-established American classics like East of Eden or To Kill A Mockingbird.  Look at something newer like The Martian.  Heck, pick your favorite Harry Potter book.  All of these are unquestionably critical and financial successes with, I feel safe saying, hundreds of millions of fans each... but look how many one-star reviews they have.
Y’see, Timmy, at the end of the day, nobody knows what my story needs but me.  It’s all mine. That’s the art part of it.  There is no democracy.  That’s where I get to be a dictator.
But once I decide I want to put my writing out there, that I want an audience, that I’d like to get paid... Well, we’re not talking about being a dictator anymore. Now we’re talking about politics. We’re talking about compromises. We’re talking about tweaking my vision to appeal to a greater audience, even when it doesn’t appeal to me quite as much anymore.  Maybe not quite as great a good, but still a “very good” that reaches a lot more people.
That’s the balancing act.
Real quick before I wrap up, I’m going to be up in Tacoma, Washington this weekend for the Jet City Comic Show.  If you’re in the area, please stop by, say hi, and tell me how this blog is just a huge waste of time for everyone involved.
Next time, I want to talk about something cool.
Until then, go write.