Hey, there!  Thanks for checking in on Christmas Eve!  Or Krampusnacht, which is a lot more dangerous, depending on some of the choices you made this past year...
Speaking of choices, I thought I’d toss out something real quick, just in case the holiday season had sparked a story idea or two in your mind.  I wanted to give you a quick warning about Christmas.
No, not in a “Krampus is coming” sort of way...
Writing stories that revolve around Christmas, or any holiday, is tempting.  They're very relatable.  A lot of the groundwork is already done for us (there’s no need to explain the plump guy in the red suit sliding down the chimney). It can be a great contrasting background for some stories.
Plus, let’s be honest. Christmas stories are lucrative.  There’s a fair argument to be made they’re consistently one of the best-selling genres out there, especially if you write screenplays.  Think of all those cable channels that are just brimming with original movies.  Heck, I had a short story in a holiday-themed anthology this year, and I know of two or three other anthologies that were open for submissions, too.
Not to sound all capitalist, but... there’s a lot of money to be made off Christmas.
Now, that being said...
If I’m thinking about a clever idea for a holiday story I need to be careful.  The ugly truth is, it’s all been done before.  All of it.  No matter how clever or original I think my take is, there’s a good chance someone’s done it before.  Because, as I mentioned above, this is a huge market and lots of folks have written lots of stories. 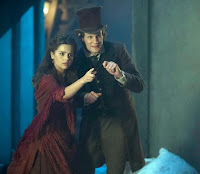 Look at it this way.  How many holiday specials are a tradition in your household?  My lovely lady and I enjoy all the classics, but we also dig out the Christmas episodes from some of our favorite shows.  And we have a big stack of about a dozen movies we watch every year about this time.  So, without even trying, there’s over two dozen Christmas stories.  Comedies. Action flicks.  Superhero movies.  Message movies.  Even a few horror stories.
And that’s just a little bit of peeking in the closets.  Think of all the different Santa Claus stories out there.  Good Santa. Evil Santa.  Naughty Santa.  Robot Santa.  Accidental Santa.  New Santa.  Temp Santa.  Kidnapped Santa.  Arrested Santa. Hell, I’ve now seen multiple stories where Santa is an action star defending his workshop from invading forces.
How about A Christmas Carol?  Personally, I’ve seen the Dickens classic done many times in the past and present, and even once with time travel on an alien planet.  There’ve been versions that leaned toward comedy, toward drama, toward horror.  Heck, I remember a bionic version on The Six Million Dollar Man when I was a kid.  No, I’m dead serious.  Steve Austin in a Santa suit leaping around and convincing a stingy businessman he was a spirit.
Ahhh, says me. But I’m not really doing a classic Christmas story.  I’m being clever and going back to the old country.  I’m writing a Krampus story.  How many people have ever heard of Krampus?

Well, you may have heard of a Finnish film called Rare Exports from a few years back.  That’s pretty much a Krampus story.  Grimm did a great Krampus holiday episode last year.  There was a Krampus movie this year.  He also shows up in that anthology I mentioned up above, and in an anthology movie I just watched the other night with friends.
Again, all done many times, and in many ways.
I’m not saying these stories can’t be done, but I need to be aware that this is a fruitcake that’s been regifted a lot.  So if I’m going to try passing it along, too, I should have a good idea how many hands it’s already passed through.  I don’t want to be giving it to someone who just saw it a few hours ago.
How’s that for one last awful holiday metaphor?
So think about stories this holiday season.  But if you’re thinking about holiday stories... put in a little extra thought.
Next time, let’s review a few things.
Until then... Merry Christmas.
Joyous Kwanzaa.
Happy Holidays.
Glorious Ascension of Tzeentch.
Now go write.