Okay, it’s just going to be a quick post this week. I found out kind of last minute that I’m hosting the Writer’s Coffeehouse in San Diego on Sunday (noon at Mysterious Galaxy—stop by), so I’ve got to scribble up some notes for that.  Also, I’ve got a big Halloween party the night before, so please don’t be surprised if I show up dressed like Rick from Rick and Morty...
Speaking of which, I think this is the first time I haven’t done a horror post on the week of Halloween.
But let me get back to this week’s point, which is... 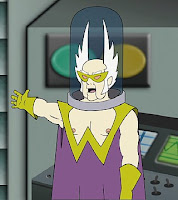 This!
One of the greatest parts of storytelling, in my opinion, is the reveal.  It’s when we find out who the murderer is, or that Phoebe isn’t really dead, or maybe how Wakko ended up with the Elder Blade, or maybe that it isn’t really the Elder Blade, or maybe that Phoebe is actually Wakko’s long-lost sister Dot and she’s had the Elder Blade all along.  Or maybe it’s something a little more mundane, but still a bit of a shock.  It might just be finding out someone died last week, or that someone actually came over to break up with you and not to make wild monkey-love, or even getting those test results back... not with the result we wanted.  On one level or another, pretty much every story is going to have a reveal of some kind.
This is how I get information across to the reader—I reveal it.  My characters answer the phone, open a book, get a text message, pull back a curtain, step around a corner, tear open an envelope, or turn slowly to see who’s sitting in that chair by the fireplace.  Lots of reveals are minor, some are subtle, and a few carry a ton of dramatic weight because they’ve just changed how my readers are viewing the story.
Now, there’s an important thing to remember here, and it ties back to something I’ve mentioned once or thrice in the past.  Facts we don’t know are information. Facts we do know (or could’ve very easily deduced) are noise.  Another way to think of noise is that it’s literary static--clutter on the page.
Since a reveal deals with information, it can’t be about facts we already know or could’ve figured out on our own.  Even if my characters don’t know it, it’s still noise to the reader.  So if I structure a paragraph or scene or chapter around a reveal that, well, isn’t really a reveal... it’s going to fall flat.
Let’s look at an example (one I’m making up off the top of my head).
Our first shot will be Yakko being sworn in as President of the United States.  Maybe ten or twenty pages later we’ll see him chatting at length with the White House press secretary. After that, he’ll be stepping off of Air Force One, waving to the crowds.

And then, finally, we’ll have him on the phone.  A black phone, one that’s still connected to a hard line.  And as Yakko tells someone on the other end “Make it happen,” our point of view pulls back to reveal he’s calling from inside... THE OVAL OFFICE!!!
Big shocker, right?
Okay, it’s not.  Really, it’s not a surprise at all.  All of us know where the President spends his workdays.  And, well, since I’d made it really clear Yakko was the President, none of us are surprised to see him in the Oval Office.  So my big reveal at the end of that example is supposed to carry dramatic weight, but instead it stumbles because it isn’t carrying anything except noise.
Y’see, Timmy, a reveal should give my readers information if expect it to have some dramatic impact.  It isn’t dramatic if we already know it.  Or if we easily could’ve figured it out.  And if my writing’s all done around the idea that it is a  dramatic reveal... that’s how my manuscript ends up in the pile on the left.
So go forth and reveal yourself in--In your writing!!!  Jeez, it’s Halloween, yeah, but there’s little kids out there...
Next time... well, I’ll do something.
Until then, go write.