Come On and Twist A Little Closer Now

If you don’t get the title reference, I’m afraid you have to leave.  It’s not my choice, you understand.  It’s the law.
Anyway...
I’ve run into a few folks recently talking about spoilers, usually pertaining to twists.  It’s a little bothersome how many times I’ve seen people say that knowing a twist in advance shouldn’t—and doesn’t—affect their view of a story.  And this is... well, just wrong.  That’s not a matter of opinion.  It’s just flat out wrong.
So I thought it might be worth discussing some of the finer points of a well-executed twist.
First, though, let’s define a few terms.
A mystery is when the main character and the readers are aware that information has been hidden from them, and the story usually involves the search for that unknown fact. At it’s simplest, a mystery is when someone in my story asks a question and then tries to find the answer.
Suspense is when there’s an important piece of information my readers know and the characters don’t. The key here is that my characters don’t know that they need to know this vital fact. The woman Yakko is going upstairs with is the murderer.  There’s a bomb under the table.  Dot’s going into a meeting with a bunch of her superiors who all know what she did.  These are common suspense situations. 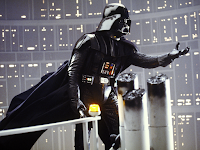 A twist is when information is revealed that my characters and the audience didn’t know was being kept from them.  They don’t even suspect those facts are out there, waiting to affect the story.  When a twist appears, it comes from out of nowhere and changes a lot of perceptions for the characters and the audience.  We’ve all been told that Luke Skywalker’s father is dead, so when we learn that Darth Vader is his father, it’s a bombshell that alters our view of everything.
Assuming we didn’t see all the advertising for the prequels...
But that’s a different discussion...
Notice that in most of these, the characters and the readers are in the same position.  Their view of things lines up.  The only time it doesn’t (with suspense) is when the characters are in extreme danger because of what they don’t know, which cranks up the tension for the audience.
Going off the above definitions, one of the main components of a successful twist is that the reader (or audience) doesn’t know it’s coming.  We can’t be surprised or taken off guard by something we’re expecting, right?  So without that element... well, it’s not a twist anymore.  This moment becomes empty, poorly structured suspense, a missed beat in the structure of my story.
Personally, this is why I’m so nuts about spoilers.  One small spoiler can rip the heart out of a great reveal and leave it flapping in the wind like an empty shirt on a clothesline.  Rather than identifying with the characters, we’re waiting for them to catch up and shaking our heads at how long it’s taking them.
Y’see, Timmy, saying a twist should still make sense whether or not I know it’s coming is like saying a defibrillator should still work whether or not it’s got electricity running through it.  We’ve removed a vital element that it needs to function.  A working defibrillator won’t always perform the function it was made to, yeah, but it simply can’t when it’s not even plugged in. 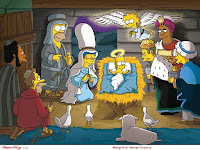 Now, there are two other things that can make a twist flop.  One is when the information the twist reveals isn’t actually a surprise, or it’s something the reader probably figured out on their own.  If you’re a long-time fan of The Simpsons, you may remember one time when Homer told the Nativity story in church.  And he ended his little sermon with these drama-filled words...
“And did you know that baby Jesus grew up to be... Jesus?”
It’s a perfect example of this point.  If I’m two or three steps ahead of the characters and the author, a “reveal” like this borders on comedy.  Which is great if I’m writing comedy, not so good if my book is a techno-thriller.  A twist that tells us something we already know, by definition, isn’t a twist, and it doesn’t matter if the author hasn’t specifically spelled it out or not in the book.  If all my readers figure out who Dr. Acula really is on page two, it’s my own fault when the big twist falls flat.
The second thing that kills a twist is the flipside of what I just said.  It’s also not a twist if there’s absolutely no way we could’ve suspected it.  Yes, a twist depends on us not knowing something’s coming, but when it arrives it needs to fit with everything we’ve been told all along.  A reveal should mesh with what we know, not contradict, and make us look at things in a new way.  Finding out Phoebe is my long-lost cousin in the last fifty pages is a twist.  Finding out Phoebe is a third-gender alien from the year 2241 in the last fifty pages means I should...
Wait, an alien from 2241?  Hasn’t this a period murder-mystery novel for the past two hundred pages?  What the hell...?

I once read a book where we found out in the last twenty pages that the leader of the all-woman biker gang is actually a vampire.  And while we’d known this was an urban fantasy novel, there’d been no clue whatsoever that vampires exist.  It was a first person story and the main character had never even told us that vampires were a thing, even though we learned in those final pages that this is the vampire she knew had killed her husband.  The reveal clashed with what I knew about the world and the character, and that clash jarred me out of the book at a point when the author really needed me to be sucked into it.
And that’s the real killer. When my twist falls flat, for any reason, it breaks the flow of the story.  And since big twists tend to come toward the end of a story, it means I’m giving my readers a reason to stop when I want them to be checking the clock to see how late it is and if they can finish the book tonight.
A twist is a powerful device, the five-point-palm technique of storytelling.  It needs to be done a certain way, but if I can master it I’ll be unstoppable. And if I do it wrong...  I’m just going to piss off my target.
Next time, I think we need to discuss paying dues.  Especially those of you who’ve been here for a while.
Until then, go write.