Very sorry this is late.  Last Thursday I was up in Seattle for Crypticon.  This Thursday was my birthday and my lovely lady had a very full day planned out for us.  So you’re getting this a bit late, but you’ll still get a new post in a few days.

Anyway, I had a quick tip for you
I’ve talked a few times here about mysteries.  A good mystery is when your characters and your audience are looking for the answer to a question.  But there’s an exception to this rule that I haven’t mentioned.  If your characters don’t care about the mystery, there’s a good chance the author and audience shouldn’t either.
This is pretty much the flipside of an idea I tossed out a few weeks back.  I can’t put the mystery under the spotlight and then expect I don’t have to show it to people.  However, if my characters are content to leave the mystery completely in the dark, odds are my readers will be fine with it, too. 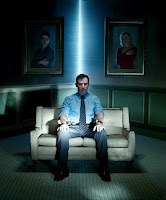 The Time Traveler’s Wife never bothers to investigate how Henry can travel in time.  We get a loose explanation of genetics and that’s it.  He and Clare just accept it as a given because it’s tied their lives together.  On the sadly-just-cancelled television show Awake, Detective Britten doesn’t care which world is real and which is a dream.  Having both worlds is a win-win for him, so the show was far more procedural than supernatural.  On The Finder, Walter didn’t care how a head injury turned him into a locating-obsessed goofball, and neither did his friends, so the show never pondered on it.
Y’see, Timmy, my characters should always mirror my audience, and I should write accordingly.  If St. George, Stealth, and Cerberus are excited and interested about something, my story should be structured so my audience is excited and interested as well.  That’s good writing.
If my characters don’t care about the mystery, though, my story shouldn’t spend page after page shoving it in my readers' faces.  If my characters have one priority and my audience has another, it’s just not going to work.  That’s bad writing, and it’s going to make things feel forced and unnatural.
Be clear on what your characters want, and make sure your story wants the same things.  If not, you’re going to create a conflict.  And not the good kind of conflict.
A quick question for you all, for the future.  Would any of you be interested in interviews with other professional writers?  I’ve got a fair number of novelists and screenwriters in my email address book, plus a good-sized pile of old interviews I did in the past with some name folks.  Would that sort of thing interest anyone here?
Let me know.
Speaking of which, next time, I’d like to drop names and talk about something very important that Kevin Smith told me once.
Until then, go write.