Wanted to toss out a quick tip for the screenwriters here.  Prose folks, there’s something here for you, too, but I’m focusing this on scripts.

As someone who read many screenplays for several contests (and lives with someone who’s read even more), I think I can safely say that one thing that drives readers nuts is the mis-use or over-use of capitalization in a screenplay.  A lot of people use them like exclamation points, and a good chunk of those people really over-use their exclamation points.  It’s hard on the eyes and it often makes the script confusing.
So here’s a simple rule of thumb my lovely lady and I came up with over dinner the other night while discussing her latest headache.  This isn’t the end-all, be-all of when to use capitals, but it’s a great guideline.
When you use capitals in a script (except for naming), it should be for the things that cannot change.  Think of it as the key plot points.  Not details, not stuff that’s extremely dramatic or packs an impact—save the capitals for the relevant stuff that matters.
Now, I can sense a response from a few folks already.  It’s all relevant, right?  That’s the whole point of a screenplay, to trim down and edit away anything that doesn’t matter.  So how can I say only capitalize what matters?
Things that matter, in this sense, are things that the script would fall apart without.  These are things that are so interwoven into the structure of my story that it would involve a sizeable rewrite to change one of them.  For example... 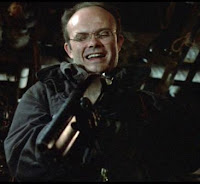 --In Robocop, Clarence blows off Murphy’s HAND with a shotgun.  Then the gang members shoot Murphy five or six times each, but the one that matters is when Clarence ends it by shooting him RIGHT IN THE HEAD.  Where all the other bullets land isn’t important, just that there’s a lot of them.

--In Sam Raimi’s first Spider-Man movie it’s vital that Peter Parker is wearing a BUTTON DOWN SHIRT at Thanksgiving, because this is how Norman sees the cut on his arm and realizes Peter is Spider-Man.  But it doesn’t matter what kind of pants Peter’s wearing, or if Harry’s in a coat or just sleeves.

--In The Matrix, we need to know the stunning blonde in one of Neo’s first training runs is in a revealing RED DRESS as opposed to everyone else wearing nothing but BLACK and WHITE.  It’s key that she stands out and it’s essentially her name (the woman in the red dress).  She’s addressed as such several times.  Mouse even has a centerfold of her.

Just to be clear, none of these examples are from the actual scripts (I have no idea which chess pieces are used where in Shawshank), but it wouldn’t surprise me to learn they were all capitalized just this way.  And if you’ve seen these movies, you should be able to see why these things were capitalized at this point in the script.  And why some of the other objects, actions, and clothes in those scenes weren’t.
Next time, I wanted to talk about some people I really shouldn’t like.  You probably shouldn’t, either.
Until then, go write.