Simon Says, One Step Back

My publisher’s doing a big sale for the holidays he’s calling Black December.  The ebook versions of ten best sellers and new releases are marked down to a mere $2.99 for the whole month.  That includes my own Ex-Heroes, available over in the right hand column here.  He’s also got five ebooks for free.  No strings, no tricks, absolutely free.  Five books he’s just giving away.  Go check it out.
Oh, and The Eerie Adventures of the Lycanthrope Robinson Crusoe isn’t part of the sale, but the ebook version's still marked down to half the paperback price.  Just saying...
Now, with that out of the way, I’d like to talk to you about Pitch Black.
If you haven’t seen the film, I highly recommend it.  Sharp dialogue, good characters, a lot of action, and a damned clever story backing it all up.  It’s the movie that really launched Vin Diesel’s career as “the guy you do not mess with,” and if you watch it with the commentary you’ll learn he also had a fair amount to do with shaping the script. 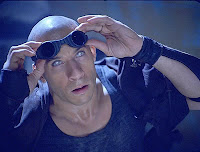 There’s a wonderful bit early on when our assembled heroes need to make a break across a stretch of open ground.  As it turns out, Diesel’s character, Riddick, has superhuman vision and can see in the dark.  He peers out, announces it “Looks clear,” and the group of survivors dashes for cover.  But then things come soaring down out of the dark sky and... well, not everyone makes it.  One of the other survivors immediately blames Riddick—“You said it was clear!”
“I said it looked clear!” Riddick snaps back.
This bit usually gets a dark chuckle from the audience.  It also points out something I’ve mentioned here once or thrice before, and I thought it was worth blabbing on about in a bit more detail this week.  As our heroes learned the hard way, “It looks clear” is not the same thing as, “It is clear.”  Riddick knew they’re not synonymous, and that difference is very important.  "It looks clear" implies there's a bit more to be said.
This is a construction I see come up a lot, where writers put an additional step between the story and the reader.  Usually they do it by adding an extra layer of verbiage that relates to something internal.  Other times it’s an attempt to do something clever with the description.  It seems to show up a lot in high fantasy writing because people mistakenly use it in the elaborate, purple-prose descriptions that genre tends to attract.  I’ve also seen people follow this route when they’re trying to be mysterious and imply a lot of spookiness that might not actually be there.
And, to be honest, it’s something I used to do a lot myself.
Let me give you a few examples...
He thought about trying to be a writer
We’ve all seen this one somewhere, right?  Nothing wrong with it on the surface.  But let’s stop and break it down for a moment.
The act of thinking implies this isn’t happening, it’s just a possibility.  So if my character’s thinking about trying to do something, it means this is a possibility of a possibility of something happening.  Unless he’s specifically thinking about the actual attempt instead of the end product, this is just excess words.
He thought about being a writer.
See?  Cleaner, clearer, and two words shorter.  Here’s another one.
She decided to write her blog post.
This is fine if she decided to—but that was as far as she got because something kept her from doing it.  But if she decided to do it and then she did it, the writer’s just eating up words again. We all make hundreds of decisions and choices every day, but most readers want to hear about the actions, not the decision to take an action.  I wouldn’t write Peter decided to make a turkey sandwich, made the sandwich, and then chose to sit at the table to eat it. Well, I wouldn’t write stuff like that any more, at least.  Why would I want to waste all those words on mundane stuff?  Peter made a turkey sandwich and sat at the table to eat it.  Likewise, the sheer act of writing tells us our lovely blogger made a decision.
She wrote her blog post.
See?  Nothing else needed.  Now check out this one...
Phoebe appeared to be a shapely blonde who stood six feet tall.
Appeared to be is one of those phrases I got in my head and used to use all the time.  Sometimes I’d swap in one of its kissing cousins, looked like, seemed to be , and a few wild combinations we shouldn’t discuss in polite company.  Problem was, I didn't understand these phrases.  Y’see, Timmy, they don’t get used alone.  This sort of phrase is the first part of a construction where the second half is either an actual or implied contradiction.  That sentence up above is really saying something more like this—
Phoebe appeared to be a shapely blonde who stood six feet tall, but she actually bleached her hair on a regular basis and made a point of always wearing spike heels.
There’s nothing wrong with that sentence, of course, whether it’s written out or left implied.  None of us will fault Phoebe for thinking that blondes have more fun and wanting to be a few inches taller.  The problem is that a lot of the time I wasn’t trying to establish a contradiction, I just wanted artsy sentence structure.  What I really wanted to say was this--
Phoebe was a shapely blonde who stood six feet tall.
So I was subtly pushing the reader back for no reason with extra words, while also showing that I didn’t really know what I was doing.  If a writer isn’t trying to establish that contradiction, using appeared to be and its bastard stepchildren isn't just wasted words-- it's wrong.
Now, there’s nothing wrong with an elaborate sentence now and then.  Most of us love a good turn of phrase—it’s the kind of thing that made us want to be writers.  Just remember that like any other element in your writing, there has to be a point to that long string of words, and they have to be used correctly. Because if they’re not, I’m just eating up words and wasting everyone’s time.
Speaking of which, next time I was going to rant about something for about a minute.
Until then, go write.