I refuse to take the blame for being late. Blogger was down. Not my fault.

And now back to our regularly scheduled rants and hair pulling...

As has been said many times before, by other people than just me, the key to great characters is dialogue. The way they communicate often tells us just as much about someone as the actual information they’re communicating. If you can’t pull off good dialogue, your career as a writer is going to be an uphill battle the whole way.

The most common way people mess up dialogue is by having, well, god-awful dialogue. Sounds silly, but there it is. Some dialogue just sucks. It’s wooden, on the nose, devoid of any emotion. All you have to do is read it out loud and you can tell it rings false. Making a cheeseburger with rotten meat and moldy cheese is bad—no further explanation is needed. If you can’t figure that on your own, there’s not much anyone can do for you.

The second most common way, believe it or not, is the complete flipside. It’s when people write dialogue that’s too real. Which sounds bizarre, I know, but let me explain...

If you listen to people a lot—people in the real world, not on television—you’ll see that they rarely use complete sentences. Oh, there are a few remarkable statesmen in the world (not all of them politicians) who can speak on any topic and make it sound like they’ve rehearsed their answers a hundred times. For the most part, though, people speak in bits and fragments. We split infinitives, backform verbs, and don’t always match those verbs to the correct number. We pause in mid-thought and try to pick up the threads a moment later. We beat around the bush and sometimes we stall so we can get the rest of our thoughts in order.

You can see this yourself by listening to a recorded conversation. Try it. Ask a friend or two if you can tape a conversation and then talk about anything. The game, politics, a movie you saw, that new pizza place down the street, the new girl at the checkout counter, whatever. They might be a bit stilted at first while they think about being recorded, but eventually you’ll both settle into normal speech patterns.

Now try to transcribe that recording—the whole thing. Write down every pause or false start in the conversation. You’ll probably be surprised how many times you stop in the middle of a sentence and then start over. Or how many times your friend makes a funny noise to fill space while he or she tries to assemble words in the right order.

Get more than two people and you’ll become aware how many random comments people make. And how much space those comments start to eat up, especially when they need to be attributed to someone.

Realistic sounding dialogue is not the same thing as real dialogue. As the saying goes, art imitates life. If art and life are the same thing, though, then you’ve just got life, not art (‘cause we’re not getting rid of life).

I’ve seen a few amateur screenplays that get this wrong in a key way. You know when you walk into a room and half a dozen people say “Hi” and there’s a little burst of small talk from all corners before things settle down again? Some people write that into scripts. So you get six or seven people saying “Hello” and the new arrival responds to all their greetings. Three or four of them ask one like questions like “What’s up?” or “How’ve you been?” or “How’s Wakko?” and the new arrival answers each with two or three words.

Yes, this is very, very realistic. It also means the writer has just taken two and a half pages (when formatted correctly) for what will possibly be thirty seconds of screen time. Unless it’s completely, 100% integral to the plot and half your story will just collapse without it, this kind of thing stands out like a flare for readers as “rookie mistake.” It’s also something that can be written off with “Wakko enters the party, greets a few people, and makes his way over to Phoebe.”

Now, there’s a second part to dialogue that’s too real. If you’ve ever worked in any sort of special field, you’ve probably noticed there’s a certain jargon that develops. Each grocery store, department store, or restaurant has their own behind-the-scenes, shorthand terms for things. If you’ve ever worked in a very intensive field that swallows up a lot of your life—say medicine, the military, or even the film industry—that jargon almost becomes another language. There’s a ton of specialized terms and phrases and abbreviations that get used by people in these fields.

Now, again, here’s the catch. People outside of these fields don’t talk like this and don’t know what these terms mean. Some writers, in the attempt to make their dialogue as realistic as possible, actually make it completely impenetrable. It’s so authentic no one can understand it except other professionals from that field.

The trick for writers is to make this dialogue sound authentic while still being accessible. Think of it like this—you’d never write a character talking with a non stop accent or thick dialect because it becomes difficult to read. You’d pick out a few key phrases and terms and just use those. Things like dropping in “all y’all” instead of “all of you” or saying “pop” instead of “soda.” These give a character a certain flavor without forcing the reader to sound out everything they say.

A great example of this would be television shows like House or NCIS or (dare I say it) JAG. These are shows about people in exceptionally specialized fields, each of which has its own terminology and jargon. 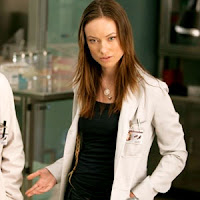 In real life, if a handful of lawyers were discussing a case or four doctors were sitting around discussing possible diagnoses of a patient, odds are most of us wouldn’t understand a single sentence (and none of the doctors would look like Olivia Wilde). So the writers of these shows only pepper the dialogue with such terms and flesh out most of it with straightforward, easily-understandable terms. Think about it—when they’re in the middle of a diagnosis, most of their dialogue is explaining their ideas so they’d make sense to a layman.

We don’t need to know what Tansey syndrome or chloroblastosis is because it’s getting explained to us. It’s not how doctors would actually talk, yes, but it still sounds good to the layman and it’s understandable to the layman. And it’s got enough facts right that hopefully doctors won’t be too annoyed or amused. Ignoring the fact that I just made up two medical conditions.

When I was writing Ex-Patriots I knew there was going to be a strong military presence in the book. While I don’t have any experience in that world myself, I was extremely fortunate to have a web of people I could call on. My best friend was in the Air Force. My dad was in the Navy. My step-sister was a Master Sergeant in the Army. I also know a couple other authors with a wide range of military experience.

But I also knew I was writing for a much broader audience than just the military. So I needed to have soldiers speak more like civilians at some points. If I didn’t, I’d run the risk of either alienating the readers or having to explain large swaths of dialogue. Neither prospect was all that exciting.

So don’t write what you know. Write like you know what you’re talking about.