Pop culture reference. It's been a while.

So, first up, I have to do that awful self-promotion thing. Sorry. If you don't want to see me stoop to shameless commercialism, skip ahead to the paragraph after next.

Over on the side bar, you'll notice a new addition. The Amazon link for Ex-Heroes, my new novel which came out earlier this week. It's a story about superheroes battling the zombie apocalypse. If you're into that kind of thing, you'll have a lot of fun. If you're not, it might change your mind and you'll still have fun. If nothing else, you'll be able to go back over the rant blog here and understand some of the references I've made to this book over the past year and a half or so. You can also hop over to Facebook and join my fan page to get updates on various writing projects, interviews, and the like.

See? Told you it was shameless.

Now, back to our regularly scheduled rant about writing...

A few years back I got to speak with a writing coach named Drusilla Campbell She tossed out an interesting little statistic--one I think has probably expanded in recent years. According to her, out of every 100 people who call themselves writers, only one of them will ever actually finish a project.

One out of a hundred. That was five years ago. I'd be tempted to say it's probably closer to one in 200 these days. What, with the number of people starting serial novels on the web and such.

By an astonishing coincidence, the number of people who succeed at writing is a somewhat smaller percentage than that. According to Drusilla, it was one out of ten of those folks who completed a manuscript. I think that number's probably shrunk a bit, too, but not by any more than the other one's expanded. Maybe one out of twenty or so. I don't have any hard numbers to back it up, but I have a couple of really solid hunches and chains-of-logic I can share if anyone really wants to see them.

As I mentioned above, a lot of people have trouble finishing stuff. More than 99% of the people who like to say they're writers never do. There are a couple different reasons for this.

The most common one, of course, is real life. We meet someone who demands more of our time. Something unexpected comes up. Work wants a little more out of us. Sometimes it's just impossible to give writing the commitment it needs

Some people use it as a sort of fail-safe excuse. Until I finish it I can't submit it or show it to anyone, and as long as no one sees my writing it can't be rejected or criticized. So, consciously or not, some people come up with various excuses never to finish anything.

And then there are the folks who just thought it would be easy to write. I mean, anyone can write a book, right? It's not like it's a skill you have to learn or practice. We all learned how in grade school, fer cripes sake. These folks get a few dozen pages in and discover writing isn't easy and it does take a commitment. Some give up quietly while others fall back on some excuse. Worse, a few of these folks actually do rush out an ending just to have it, and often get angry when this slipshod conclusion gets criticized.

I joke a lot about Lizard Men from the Center of the Earth, but here's an ugly truth about it. I never finished it. Yeah, it was written on yellow paper and twenty-three pages is still impressive for a third-grader, but in the end it was never completed. Even when I revisited it in seventh grade and added illustrations and a shovelful of Arthurian legends. I also didn't finish the cliché-filled sci-fi epic Piece of Eternity, a God-awful fantasy thing I've been trying to block for years (we'll chalk that one up to excess hormones at puberty), my Boba Fett fan-fiction novel (long before there was such a term as fan fiction),or even the college novel I've mentioned a few times, The Trinity. Not one of them finished.

By an astonishing coincidence--the same one I mentioned above, in fact--not one of them sold. 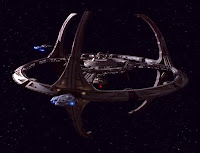 The first long-form project I ever finished was a script for Star Trek: Deep Space Nine called "Point of Origin." It got me fifteen minutes in a room with Ron Moore to pitch story ideas, plus repeated invites to come up and pitch other stories at the Star Trek offices.

The first novel I finished was The Suffering Map. It got several requests from agents. Big agents, as people like to call them.

A large part of my success as a journalist is the editors know they can toss me an assignment and I will finish it on time. The fact that I'm a competent writer is a big part of it, too, of course, but a lot of it is just the simple fact that they know an article that gets assigned to me will get done by the deadline.

Y'see, Timmy, the point I'm trying to make is that no one's going to be interested in a partial manuscript or a script fragment. You have to finish something in order to achieve any sort of success. Unless your name is King, Rowling, or Brown, you will not sell an idea to anyone. Don't assume it's any different in Hollywood, no matter what some vehement film professor--or film student-- tells you. I keep track of script sales for a living and the last time I remember hearing of someone selling a raw idea was five years ago, when David Koepp sold his idea for the film Ghost Town. In other words, to the best of my considerable knowledge on the subject, the last time anyone at a film studio bought just an idea it was a small, indie film concept that was coming from one of the top ten money-making screenwriters in the world.

In other words, for the purposes of all of us here at the ranty blog, it doesn't happen. You will not succeed as a writer until you finish something. It doesn't matter that you did nine-tenths of the work and you know how it's going to end, people want to see all of it--especially that spectacular finish.

We have to write. And we have to finish what we write. If we don't, we've got nothing.

Next week, if no one suggests a new topic, there are going to be some cuts.