Is it just the view on my screen, or has the tag cloud over there in the right margin kind of... collapsed? Shattered? It doesn’t look right, that’s for sure. Apologies if you’ve gone looking for something and it’s especially hard to find.

I stumbled across an issue recently in two very different books, and then in a movie, and it’s semi-related to some things I’ve talked about before. So I figured it might be worth a little refresher. And, not to sound silly but.. some of you are going to get this immediately and some of you aren’t.

There’s an idea I’ve mentioned here a  few times, which I first heard (read, really) from Damon Knight.  If we’re presented with a fact we don’t know, it’s information. If it’s a fact we do know, it’s just noise. I don’t bother to explain what the ranty blog is about every week, because if you’ve found yourself here odds are you already know. But I will discuss Phoebe’s height a lot this week (she’s over six feet tall) because it’s kind of germane to the discussion, as one might say. 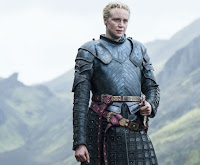 It’s very important that Phoebe is tall in my story. In fact, it’s semi-critical that my readers know she’s just over six feet. It’s a key point for her, and I can’t have them picturing her shorter—let alone drastically shorter—because it’ll make things very confusing at a later point in the story.

So... how do I do this? How do I make sure that when readers picture Phoebe, they picture her as just-over-six-feet in height? That it’s one of her defining details, something they absolutely picture about her?

Well, yeah, I have to put it in her description, sure. Writing it out is kind of a given. But I’ve talked before about how descriptions don’t always stick. We get mental images of characters that don’t always match up with their written descriptions. And, as I’ve mentioned, it’s really important that people remember Phoebe’s pretty tall (she is, as I may have mentioned, just over six feet).

Which brings us to another idea I’ve talked about—repetition. I’ve talked before about repeating words, phrases, and structures to get a certain effect. What I’d like to talk about today is using repetition on a slightly more visible level to try to cement important details (like Phoebe’s just over-six foot height) in my reader’s mind.

And I’d like to do that with the obvious example—A Christmas Story.

For those of you who are somehow unfamiliar with the movie, A Christmas Story is about a boy named Ralphie who wants... well, we can probably say is obsessed with getting a Red Ryder BB gun. It’s pretty much all he talks about. In fact, in a  ninety-three minute movie, he mentions it by name almost thirty times. He’s basically saying it every three minutes. If we go off standard script timing the Red Ryder BB gun comes up every three and a half pages. Is this a good rate to mention something important? I mean, A Christmas Story’s a legendary film, so it’s gotta be doing something right, yeah?

Let’s keep a few things in mind, though. Ralphie’s an obsessed little kid. He’s basically the nice version of Eric Cartman ranting about what color MegaMan he wants for his birthday. He’s single-focused in a way most mature adults grow out of pretty quick. And while it’s funny in small doses, I think we can all be honest and admit that Ralphie’s... kind of annoying. It’s in a cute way, but there’s no way he’d get away with this if he wasn’t a chubby-cheeked little kid with glasses.

(who later grew up to hate Iron Man and run tech support for Mysterio--seriously!)

But if I’m not writing from the point of view of an adorkable pre-teen, this level of repetition can get annoying real fast and start dragging my story down. Take Phoebe and her just over six-foot height for example. I only mentioned her five times (six counting this one), but the mentions of her and her height were starting to get on your nerves, weren’t they? There’s just so many times I can repeat this information before you’re grinding your teeth and saying “Yes, I get it, can we move on now please...”  In this case, repetition is more of a necessary evil, because there’s no way for us to get things across without putting it on the page somehow.

As a good rule of thumb, I think I’d like to fall back on, well, another rule of thumb I’ve mentioned here once or thrice before. The rule of three. Really, really quick and dirty, the rule of three basically says by the third time I mention something—who Dot got the necklace from, needing to be worthy to lift the hammer Mjolnir, or how tall Phoebe is—my audience almost always gets it.

I’d like to add a small proviso to that, just for when we’re talking about this specific instance. Whatever my super-important detail is, I should mention or give an example of it twice very early on. If it’s Dot’s necklace, maybe she can muse about it once and someone can ask her about it. If it’s about that hammer, maybe Odin can whisper about it once and Thor can demonstrate it fifteen or twenty minutes later. Maybe Phoebe can address some part of her morning ritual she needs to adjust for her height (crouching in the shower) and then someone else can actually flat our comment on it.  These are all early, act one sort of things. Formative things. A one-two punch to land the information and drive it home before it has a chance to become noise.

And then forget about it. If a moment comes up in the story that absolutely calls for this detail to be mentioned again, but if not... don’t. Trust that your audience has it in mind.

The third time should be very close to the payoff, even if it’s hundreds of pages later. This is my last chance to nudge that idea into the reader’s mind before the reveal slams it into their eyes. Or ears. Okay, also into their minds. Look, this isn’t an exact science, okay?

And again, this is only if that fact or detail is really important. Like, deathly important.  Story collapses without it important. If it’s just me wanting Phoebe to be a blonde or, hey, the hammer has a woven leather grip... well, these are just regular bits of description. They’re the things I don’t worry about because my readers are probably going to have their own mental images for them. And that’s fine.. Seriously. If you want to picture Phoebe having auburn-brown hair, that’s cool  And because it’s not important, I don’t want to be driving that point of description home.

Actually, y’know what? I just thought about a better analogy (thus rendering most of this post irrelevant). We’ve talked about names here a bunch of times. How it’s okay not to name some characters? I can just let them sort of be in the background?

That’s what details are like. There will be a lot of details in my writing that can be beautifully done, but ultimately they’re just sort of there and that’s okay. My reader can enjoy them in the moment but doesn’t need to keep them firmly in mind for things to work in my story. The ones I want to repeat, the ones that need to be specific, are the ones that are going to have an effect on how things unfold.

Y’see, Timmy, much like with names, I don’t want to bog down or annoy my readers with a bunch of details that aren’t going to matter. And I still don’t want to overuse the ones that are going to matter, because that’ll annoy them, too. I need to find that sweet spot where the facts register and get remembered, but don’t become noise.

Next time, I’d like to talk real quick about going with the default settings on this thing.