Grrrrh. Running behind again. Sorry.  Juggling too many things right now.  Honestly, I think I’m thinking about juggling too many things and just being hit with a paralysis by analysis situation...
Anyway...
Speaking of things that aren’t immediately apparent, I wanted to talk about a problematic character point for a moment.  It’s one I’ve stumbled across a few times (and fallen victim to once or twice myself), and once I worked out exactly why it was problematic, I thought it was worth mentioning.
A few quick examples...
I saw an older movie recently from the dark era of superhero films. You know, that time before Blade when studios (and writers, and directors...) really didn’t believe you could do a serious superhero movie. Well, not without changing everything about it. Play it more for laughs.  Minimize the costume.  Avoid logos. Avoid masks.  Absolutely no capes.

Really, how could you hope to do a movie about superhero characters who wear masks and capes and get anyone to take it seriously?
Anyway, this film had a scene where the superhuman hero waded into a minor gang war while wearing his street clothes.  To be clear, at this point, the hero knew the full range of his abilities. Super-strength.  Near-invulnerability. Enhanced reflexes.  So the bad guys were throwing themselves at this skinny guy and ending up with bruises, cracked knuckles, broken limbs, maybe even one or two concussions in there.  By the time they figured out something wasn’t right, the hero’d probably sent a dozen of them to the emergency room.
Here’s another example from the book side of things.  As usual, names, genders, and genres have been changed to protect the innocent.  Or maybe they haven’t, just to throw you further off the trail...
A friend of mine had been doing a western horror story recently and asked me to take a look at his current draft.  His main hero, Wakko, was a pretty solid gunslinger/sharpshooter type (yeah, named his lead Wakko—weird coincidence, isn’t it?).  At one point, Wakko and the other heroes find themselves taking refuge in an old frontier fort that’s run by some less-respectable types. Wakko wanders around and finds the local tough guy, and inwardly notes a few things that confirm the guy may have been the best in the fort, but that doesn’t mean he’s particularly good.  To prove it, and make a point, Wakko teases and insults the other guy until he finally leaps up, grabs for his pistol—
And Wakko flicks out his own gun and shoots the guy dead.  Justified, of course.  That guy was trying to draw.  Everyone saw it.
I made a note that this scene didn’t make Wakko look particularly heroic.  In any sense.
This sort of thing is a hustle.  A con.  If you’ve ever played pool, nothing annoys people more than to discover the cute “rookie” who tricked them into wagering everything on their third game is actually a pool shark with countless notches on her belt.
One thing about a hero—in real life or in a literary sense—is that we expect a sense of fairness and general decency from them.  They shouldn’t abuse their power.  They won’t deliberately harm people.  Yeah, they might have to do awful things at some point, and they might not hesitate to do them when they need to, but it won’t be something they want to do. 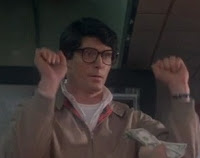 Y’see, Timmy, a superhero in regular clothes is... well, just a dick.  Yeah, even when it’s Christopher Reeve.  Let’s be honest, that was a cheap move, beating up that guy in the diner.  A green beret who goads people into taking a swing at him is also a dick.  Or a gunslinger who forces somebody into a quickdraw contest.
Honestly... it’s a bully move.
Now, when my villain (or just a general antagonist) does something like this, it often works well for my story.  How often have we seen our hero throw a punch or kick or hail of bullets that had no effect?  What appears like a minor obstacle  just became a much more serious challenge for my heroine or hero to deal with. And challenges are great.
But bullies aren’t.
Especially when they’re supposed to be my protagonist.
Next time, I wanted to talk about some thing.
Until then, go write.