It’s the Halloween season, so I thought this’d be a good time to tell you about this nightmarish thing I saw once.

I mean, it was just hideous.  This thing was like Lucifer and the heat death of the universe had a child together.  And not a wanted child. One of those “we got seriously drunk and shouldn’t’ve done this and it wasn’t even that fun but now I guess we’re parent together” children.  Yeah, there’s no question this thing knew its parents didn’t love each other and only stayed together for it.  You could see it in the eyes.  It had eyes like those island wells Conan used to find in all the old Robert E. Howard adventures.  Conan finds a lost city at the center of the island’s jungle (or at the top of a hill or plateau) and there’s always a big stone plaza with some kind of pool or well, swirling with water or blood or eternal, stygian darkness.  One of those sort of wells
Its whole body was like that, really.  It was the kind of thing you’d read about in pulp supernatural stories or old horror comics, where the writers would throw together a few adjectives to create something that was just visually repellent on one level or another.  They’d exaggerate this limb or that feature to the point your mind just couldn’t help but register it as unnatural.  Alien, even.
And the smell!  If you left someone to die alone of exposure on a mountainside, with just enough food and firewood to give them faint hope but not enough to actually keep them alive—the few minutes before life left their body, that’s just what it smelled like.
Okay, there’s more (believe me, I’ll never forget this thing) but if I don’t stop now we’ll never get to the actual point I wanted to make.
Every now and then I see a writer so desperate to be artsy, to write “literature,” that they load their work with metaphors and similes.  I mean dozens and dozens and dozens of them.  Why just call something red when we can describe it as the color of blood and roses and UMass sweatshirts, right?
That last item is kind of a hint where this is going.
Of course, blood and roses are the obvious choices if I’m going to describe something as red without... y’know, actually saying red.  So some writers feel the need to come up with seriously obscure visuals or tortured similes in order to not go the "obvious" route.  Yeah, you can all guess what color a UMass sweatshirt is because I just lined it up with blood and roses.  But if I told you the sky was the color of a UCLA sweatshirt is that... good?  Bad?  Unnatural?
This is really similar to—a natural outgrowth of, really—an issue I’ve brought up a few times before.  Some writers go out of their way to find rarely-used, little-known words they can use in their manuscripts.  A few of them go one step further and use these words to create their metaphors.  Or they’ll use such obscure or personal references that the description means nothing.  Telling you the beast had fur the color of my first childhood cat doesn’t really tell you what color its fur is.
I can still do worse, though.  Remember that nightmarish thing I saw, the one I described up above?  Let me ask you a question.
Do you have any idea what this thing looks like?
Can you describe it at all?  Any specific aspect of it?  Height?  Weight?  Color?  Heck, do you even know if it’s alive or dead? Am I describing a creature or a statue or a really poorly-designed rocking chair? 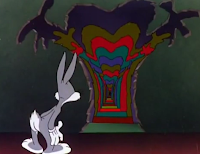 Sometimes we get so caught up in evoking a certain image or mood or sensation that we... well, we never actually describe anything.  Our attempt to viscerally describe the horror actually leaves us with a horror-shaped hole on the page.  It’s scary for half a beat, but then we realize there’s not anything there.  It breaks the flow as we have to stop and figure out what something
In screenwriting, this kind of thing is even more deadly.  Screenwriting’s a really precise form where I need to correctly convey a message to multiple people.  The director, the actors, the prop people, the wardrobe folks. the makeup artists, maybe even a special effects team.  We need to all be on the same page regarding what the demon prince Ognaron looks like.  Because if we’re not, well... our shooting day is going to have a lot of delays.
Back when I used to do interviews, David S. Goyer told me he got (playfully) chewed out once by Guillermo del Toro for a weak bit of metaphorical description he’d used in a script they were working on.  And then Goyer admitted he was telling me this because he’d done the same thing again—to himself—when he got to direct his own screenplay.
Now, don’t get me wrong—I freakin’ love a good metaphor.  A clever, descriptive turn of phrase is like a shot of good whiskey. It’s a hard kick that makes me feel all warm and soft in the gut.  It’s not unusual to hear me make a small gasp or sigh after one.
But...

Y’know what happens if someone does shot after shot after shot after shot?  I’ll give you a hint—it’s not pleasant.  Yeah, some folks have more tolerance than others, but by the twelfth or thirteenth, well, most people are in a bad place.  Especially if they’ve been doing them one after another.  Too many in a row without something solid in there... that’s a recipe for disaster.
Y’see, Timmy, like whiskey shots, I don't want to have nothing but metaphors.  They’re fantastic and lovely, but for them to really work I need some solid stuff, too.  Hell, there’s a reason people say to have a lot of bread before a night of drinking.  It’s plain and kinda boring... but it’s a solid foundation that makes the other stuff a lot easier to swallow
So get out there and celebrate the wild, crazy horror that is Halloween.
But, y’know, don’t be scared to actually describe it now and then.
Next time, I’d like to share a bit of advice about something you should always never do.
Sometimes.
Until then, go write.