Pop culture reference, four hundred years late.  Plus, if you actually know how to read that title line, you’ve got a hint at what this week’s ranty blog is about.

Sorry this is late, by the way.  Yesterday was early Christmas lunches with family and parties at night with friends.
Speaking of which, one last push before Christmas—you can still order Kindle books as last minute gifts and my publisher has a ton of them on sale for dirt cheap prices, including my own Ex-Heroes.  You can also pick up the Kindle version of The Eerie Adventures of the Lycanthrope Robinson Crusoe for half off the paperback price.
Now, with all that out of the way... let’s get back to our title subject.
One thing I stumble on a lot in stories is names.  Sometimes writers will load up every single character in their manuscript with a proper name.  I read through and I know the given name of the cabbie, the waitress,  the office intern, the homeless guy at the freeway exit, the woman whose ahead of the main character in line at the grocery store.  It doesn’t matter how important—or unimportant—they are to the story, they get a name.
Another thing that makes for a troublesome read is when there are lots of people with similar names.  Sometimes, if there are enough of them, it can just be the first letter of the name.  Believe it or not, I read two scripts this year by two different people, but each screenplay was loaded with names that began with the letter J.  There was Jason, Jackie, Jerry, Jonathan, Javarius, Jacob, Jenny, and even a Jesus.  I read one the year before where everyone’s name began with P.  Since names are the reader’s shorthand for characters, making them confusing is not a great way to go.
What I’d like to do now is to suggest a simple rule of thumb that can eliminate both of these potential problems.  And I’d like to illustrate this rule of thumb with a popular character most of you probably know...
Calvin and Hobbes was created by Bill Watterson back at the end of that ancient decade known as the ‘80s.  The glaciers had retreated, a few mammoths still wandered the plains, and I had just started college in western Massachusetts.  The two title characters were Calvin and his stuffed tiger, but after them the two people we saw the most were Calvin’s long-suffering mom and sometimes just-as-mischievous dad (no real question where Calvin got it from).  Their names, as any fan of the series knows, were Mom and Dad.
No, seriously.  That was it.  Mom and Dad.  I challenge anyone here to find a single scrap of evidence from the decade or so of Calvin and Hobbes strips that shows these two characters have any names past that.
There’s a simple explanation for why they didn’t.  The entire strip is done from Calvin’s point of view.  In his world, people randomly transmorgify into giant bugs or space aliens.  Dinosaurs are still common if you know where to look.  And those two adults in his house with the sagging poll numbers are just Mom and Dad.  Not “just” in the sense that they’re diminished somehow—they simply don’t have any identity past what Calvin’s given them.
A character’s name should be what your main characters refer to them by.  If my main character doesn’t know their name (and never will) there’s probably not a reason for the reader to know it.  Calvin never thinks of his parents as anything other than Mom and Dad, so within the story of Calvin and Hobbes they never get names, just those simple titles.
It’s not just Calvin and Hobbes, of course.  There are a lot of examples where storytellers don’t name someone because it’s unrealistic for the main character(s) to know that name.  A few other well-known characters without names include... 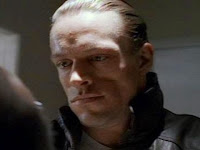 It didn’t lessen any of these characters to not have actual names.  If anything, you could probably make the case that some of them were more memorable because they didn’t have names—it added to their sense of mystery.
Consider it this way.  Stephen King’s novella “Rita Hayworth and Shawshank Redemption” is about Red, Andy, and the other prisoners.  Because of this very few of the guards get named, even though there are dozens of them in the story.  They’re the outsiders.  But in King’s The Green Mile it’s the guards who are the focus of the story so most of the prisoners don’t get names, even though there are hundreds of them in the prison.
Or, if you prefer, consider this.  If you’ve ever worked as a waiter or waitress, or ran the checkout counter at a store, how many of your customers could you name?  On the flipside, can you name the waiter from the last time you went out?  Or the clerk the last time you bought something?  They were probably even wearing a nametag, but I bet you can’t.  And the reason you can’t is because they weren’t important to your story.
While giving every character a name helps show how well-thought out the world is, in the long run it makes a story confusing.  If your main character doesn’t know who someone is, there’s nothing wrong with just calling them Man #3 or the other girl, and it usually makes for a much cleaner, easier read when you don’t have to info-dump half a dozen names on each page.
Next time, I thought I’d do my annual sum-up of the year in writing.
Merry Christmas, Happy Hanukah, and a general Happy Holidays to you all.
Try not to take the whole week off from writing.